The menu at All’onda traverses this culinary New World that spans the seemingly wide gap between Italian and Japanese cuisines, stretching some rather sensical themes that pull closer the other-side-of-the-world ideas of Venice and Tokyo.  The restaurant is tucked away on a small street near the rush of Union Square, its two floors a hideaway from the noise and commotion.  Still, the decor belies the refinement and portioning of the dishes, as well as the minimalism of the menu, which conjure the ethos of fine dining.

The dishes we ordered were carefully composed (particularly with crudo, and even the pasta) – I can only imagine the neatness of the mise-en-place.  Maybe here a whisper of a sushi master’s touch, or there a breath of the kaiseki sensibility, but more than anything the food suggested Chef Chris Jaeckle’s fine dining days at Michael White’s Ai Fiori.  There are plenty of ingredients and flavors that nod towards the Land of the Rising Sun, especially the soy underneath the hamachi (and the kuri squash alongside), the miso alongside the razor clams and sopressata, the beautiful uni adorning the bucatini.

The crudo and the mains were all great, albeit a bit wanting in size – again, the unspoken sense of fine dining.

Razor clams with sopressata, fine herbs, in a miso gelée.

The hamachi in particular was revelatory, the blend of olive oil and soy sauce.

The pastas were also damn delicious.  Lumache with treviso (the radicchio-like leaves), aged-duck ragu, and a sprinkling of chocolate.  Other than the richness of duck flavor, the ragu itself was barely noticeable, just a few slender threads of meat as a reminder. 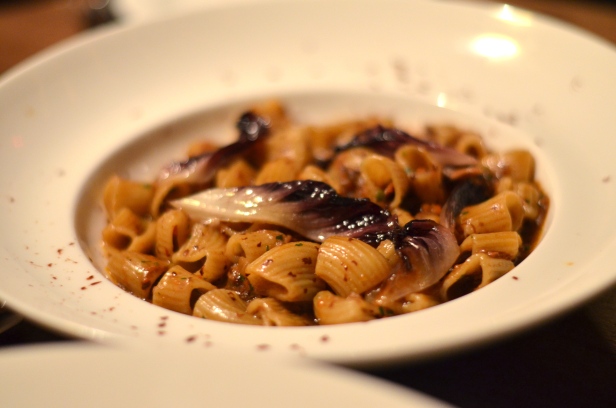 Black risotto with cuttlefish, radicchio, and bottarga.  As if some creative chef set out to make an opulently spectacular version of congee.

And the bucatini, this uni-enriched decadence topped with crunchy bread crumbs.  Holy shit. 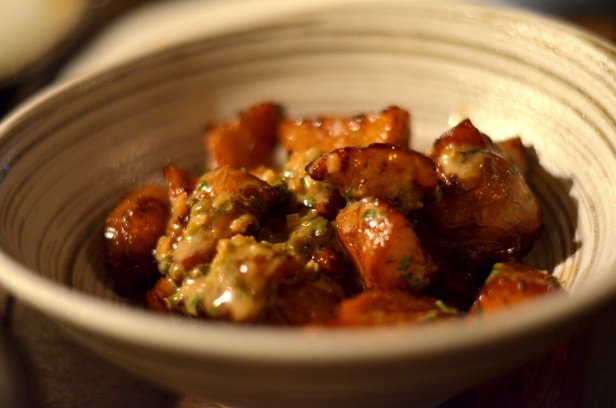 Dinner ended with a shared plate of olive oil cake, which frankly was a subpar ending to an otherwise superb and enlightening trip through one chef’s mind.  There’s something cool about experiencing an idea manifested, much in the same way as eating a great tasting menu.  I think all’onda in part does that with its dishes, with some real soulful notes along the way. 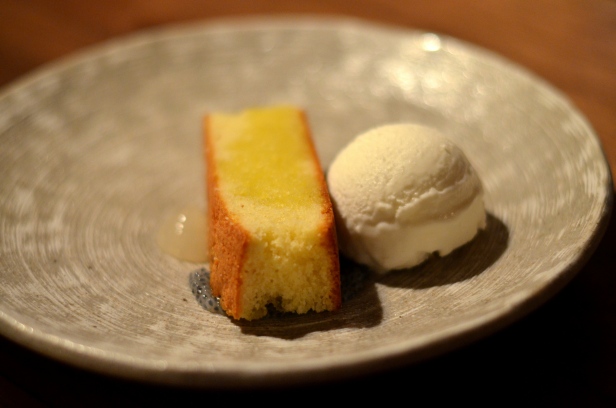