Suffice it to say, I am always on the lookout for fried chicken.  It’s my favorite food group, right above dairy, noodles, aged meats, and fatty tuna.  I’m no food scientist or nothing, but that’s a balanced diet.  My friend Ashley, who also shares my affinity for poulet frit and nutritional immodesty, tipped me off towards a fried chicken shack called Sweet T’s (Tripadvisor) in Providenciales near the airport that would whet my appetite.

We cruised around in our tiny rental car until we saw the gazebo-shaped walk-up situation (it’s next to a gas station, if that helps – Google maps location here).

The best thing – well, one of the best things – okay, first of all, I don’t really understand the apostrophe situation on this sign here.  But one of the best things is how one orders chicken at Sweet T’s: you don’t order a number of pieces or a set.  You order in dollar quantity, and they serve you that quantity of chicken and you pay and go on with your day.  For example:

Sorry, by end of transaction, I did not mean to say that there wasn’t also this interaction: 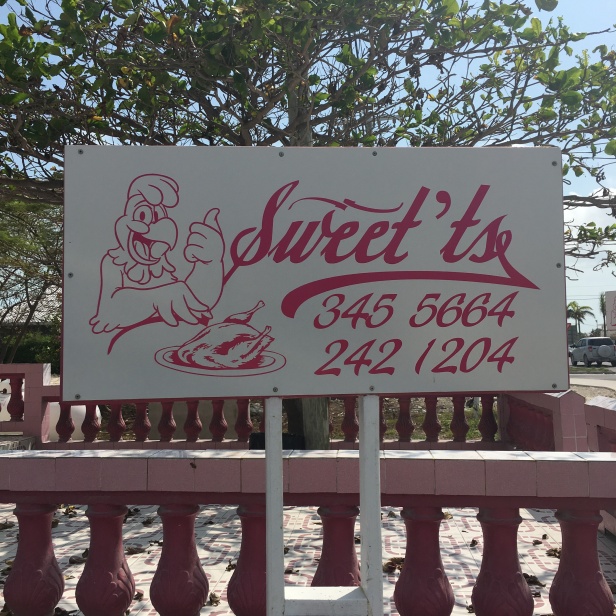 Mostly wings and drumlets.  Simple enough, just a lot of chicken, crispy and delicious.  A little on the dry side, which was exacerbated by our paucity of hot sauce.  We definitely didn’t get enough hot sauce.  Be sure to ask for more hot sauce.  That’s my number one piece of advice to you when it comes to Sweet T’s (I guess).  There’s no implication in the dollar amount of chicken you order that you’ll get a corresponding amount of hot sauce (I think this was maybe $8 or $9 dollars worth of chicken).  Okay, enough about hot sauce. 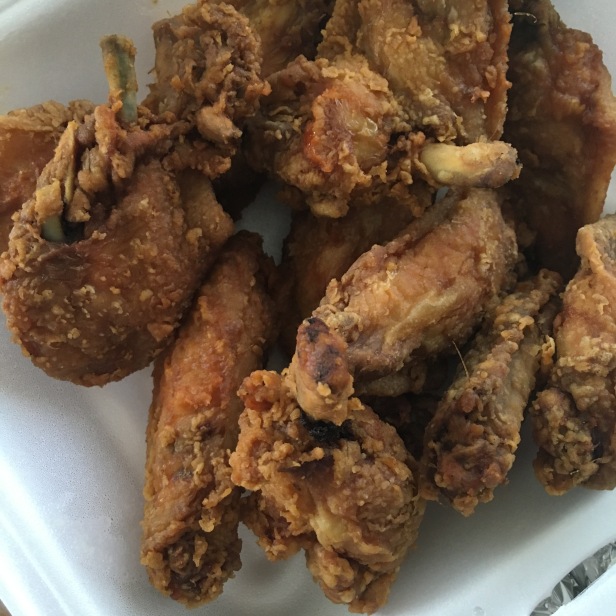 The next day, we took a little drive from the Grace Bay side of the island to Chalk Sound, this spectacular vista of intense aquamarine and sweeping breeze.  Along the southern shore of the sound is a vacation property called Neptune Villas, from which you can rent a kayak for a nominal fee (worth it) and whose restaurant, Las Brisas (Google Maps), offers lunch with a view. 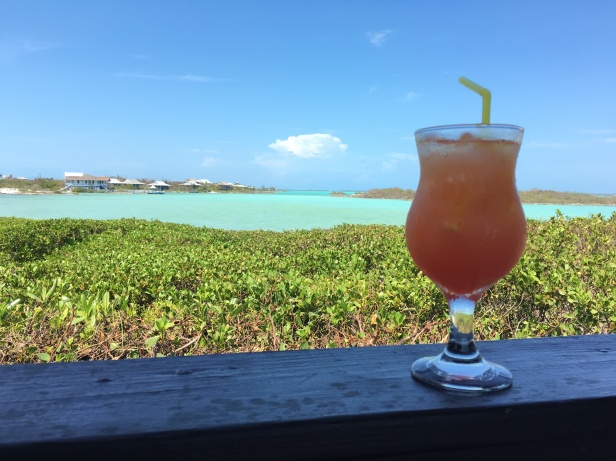 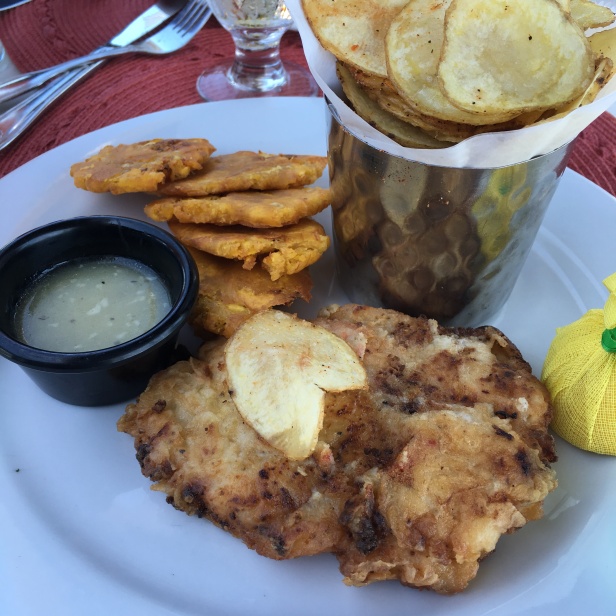 Fish tacos, hot and crispy, and a few spoons of sweet relish on top.

We also made a night-time trip to Da Conch Shack (Yelp): the obligatory fresh conch salad (pretty great), some fried something something (not memorable), and a slice of key lime pie (with the graham cracker crust).  It was also really windy that night, and combined with the sounds of crashing waves emanating from the almost-pitch black ocean, made for an interesting backdrop to a meal.

The next day, we – not surprisingly – went in search of more food.  Found a place called Smokey’s, which apparently had moved from its original place of business near the water (it used to be called Smokey’s by the Bay) to somewhere decidedly less panoramic: the dark second floor lounge of a casino.  Luckily we were getting our order to go, but then again, I’ve never truly believed that the environs and its dinginess or dirtiness should always reflect poorly on the quality of the food.  Many of my favorite or most interesting Chinese and Southeast Asian restaurants have been somewhat ramshackle establishments, either street food or otherwise sanitarily dubious.  And that was actually less so the case here – it was an odor not of vermin but of spirit, whatever gambling losses were incurred and discussed in that dreary place, the food was no worse the wear.  BBQ ribs, grilled chicken, with dirty rice and a little slaw and avocado.  I ain’t mad atcha, blackjack and dominos players – noon is a good of a time as any to wager part of your monthly salary! 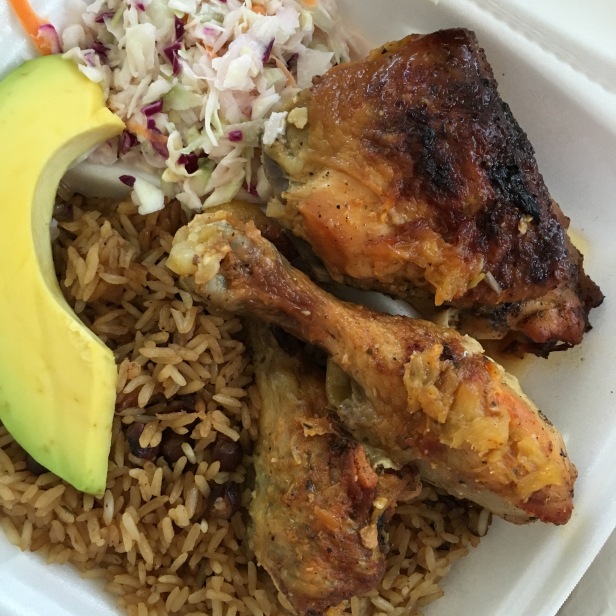 Then, on our last day in Providenciales, we took a lazy drive to the northeastern shore along Blue Hills Road, trying to slow down the time and delay our departure.  We drove past Da Conch Shack, past some quaint homes and a church or two, to Three Queens Bar and Grill (Tripadvisor) (Google Maps).  When we arrived, it wasn’t quite open yet, so we wandered along the shore to kill time, watching swooping pelicans dive for fish and noisy scooters putter on by, some stopping along the roadside ahead for a haircut or a friendly conversation.  When we saw some movement around Three Queens, we headed back up the road and took a seat on the patio.

We ordered a similar meal as we’d had from Smokey’s: BBQ ribs and chicken plates, with beans and rice and slaw, this time with plantains.  Side note: I love plantains.  I’m no expert on island food, so I don’t know how to rank any of these per se, but the food was tasty, simple and flavorful, the ribs a little chewier than the version from Smokey’s, but the chicken was much more tender.  The guy eating next to us, a Provo native who worked at the utilities company, ordered an okra gumbo of some sort, not on the menu, which gave me a slight pang of regret, until I realized that I don’t like okra.  But getting the white-people-menu treatment definitely left an emotional scar. 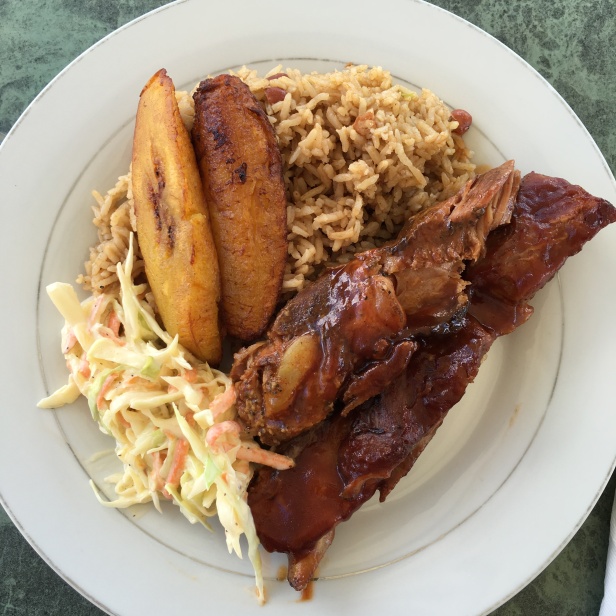 We departed Providenciales with excellent culinary memories – including one not photographed at Mr. Grouper’s Restaurant (Google Maps) where we predictably ordered grouper and were well rewarded.

All love for Turks & Caicos, even if I got white-people-menu’d.