I don’t usually listen to Timeout (because their food recommendations are often unreliable, different from my personal taste, or are more tourist-friendly), but surprisingly, they had a pretty good and also comprehensive list of Beijing’s top dumpling spots (here).  Over a two-day period, I covered five dumpling houses, in order of personal preference:

And as I was wrapping my stay in China, I had a short weekend to myself, so I decided to hop on the express train from Shanghai Hongqiao for another frenetic eating tour.  I’d already had some practice in Singapore with borderline masochistic face-stuffing, so what was another weekend?  Well, to be fair, one thing to note for most dumpling houses is that there is typically a minimum order (by liang, 两, which is I think some unit of weight?), so dumpling count adds up quickly if you are aiming to try various fillings.

After a smooth (literally, the high-speed train is an incredibly smooth ride) straight-shot to Beijing, the tour started slow, with a lousy plate of doughy bland poached dumplings at the train station outpost of government-owned Lao Bian Dumpings.  I suppose I should’ve known better, and visited the flagship location if I went to any.  In any case, the dumplings weren’t so much bad as boring.  I never want to feel like I’ve just wasted stomach space, you know?

After this disappointing batch, I headed over to Tianjin Bai Jiaoyuan in Xicheng District, which was the nicest of the dumpling restaurants, as it is actually a proper restaurant with a full menu of which dumplings are just a small but famous portion.  Tianjin also has some really interesting fillings, of which I ordered two that were really interesting (shrimp and tofu, and salted duck egg yolk with pine nuts), as well as the 三鲜 ‘three delicacies’ house special potstickers.  The salted duck egg yolk (boiled) dumplings were astonishingly good at first bite, deeply savory and unctuous as egg yolks go, with the subtle crunch of pine nuts.  But, eating a plateful by myself was not possible; they were just too heavy and the pastiness of egg yolk gets a little uncomfortable after the fourth or fifth dumpling.  The three delicacies potstickers (definitely go with the potstickers, with the beautifully charred skin) was also quite delicious, where somehow the holy trinity of pork, shrimp, and fish collide and multiply and converge on your tongue with a godly burst of salinity and umami. 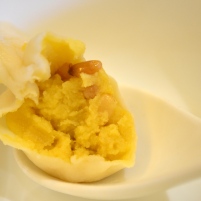 The next day, I headed to the Bao Chao hutong, on the northern side of town, where quaint little alleys wind through collections of dusty, low buildings whose streetfronts are stuffed with crammed shops of knick-knacks, cheap eats, and whatever else.  Among this maze is Mr. Shi’s Dumplings (老石饺子馆), which is a decidedly tourist-friendly establishment, based both on the clientele as well as the restaurant’s polyglot approach to its wall decor and menu.  I ordered a set of their particular version of potstickers (三面焦, which translates to three-sides-charred), with a few different fillings.  While the pork and sweet corn filling was fairly enjoyable bite, with good balance in the textured, sweet kernels and soy-sauce’d fattiness, the skin was too tough and overbearing.  It could’ve been my error in not ordering any boiled dumplings, but as they were, the dough was not ideal for pan-frying. 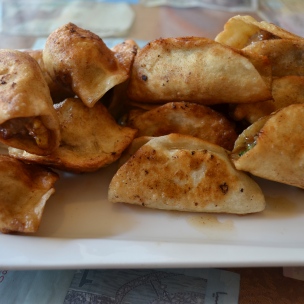 After Mr Shi’s (and a couple of hours in between to digest), I stopped by Xian Lao Man for an afternoon snack.  I went for the three delicacies potstickers again, as a benchmark I suppose.  Xian’s were at least on par with Tianjin’s in terms of juiciness and fullness of flavor.  I also threw in an order of scrambled egg and tomato dumplings; the filling is a super-traditional dish by itself, and I was curious how it would fare wrapped up.  Xian’s version was quite nice, a soft sweetness nested in a pillowy dough. 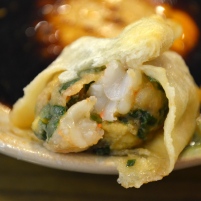 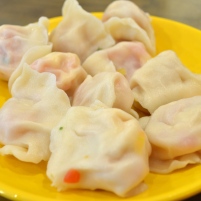 The final stop on this magic carpet ride of dumplings was probably the most inventive, and certainly the most decorative.  Part of the fun is to order a platter of dyed dumplings, whose dough are spruced up with natural food coloring (made from carrots, tomatoes, purple cabbage and spinach).  They also have a whole separate menu exclusively for dumplings (I’m not sure whether Baoyuan or Tianjin has more variety), so be sure to browse it.  I ordered the multi-colored platter, which I wouldn’t say is gimmicky, but the dyes don’t really taste like anything, so the focus is really all on the filling.  On that front, Baoyuan really offers up some funky, expertly delicious filling combinations that I hadn’t seen anywhere else.  The fillings I had included (1) purple cabbage, bean sprouts, rice crisp, minced pork, (2) dried bamboo shoots, daylily, egg, St. John’s wort, and ground pork, (3) diced daikon pickles, (4) tomato, mushroom, onion, beef.  I loved the daikon dumplings, if only because I love crunch and saltiness of Chinese pickled daikon (萝卜干), and the tomato dumpling was particularly unique, like a bolognese (albeit sweeter, and without herbacious quality of basil and oregano) ravioli, an inverted experience of Italian food if we were to get philosophical about it. 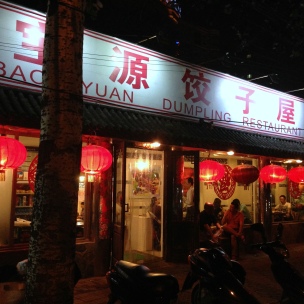 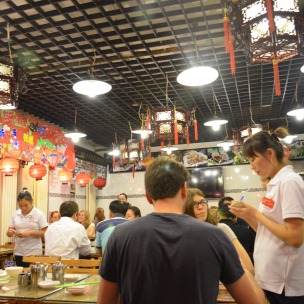 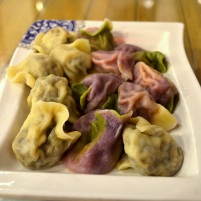 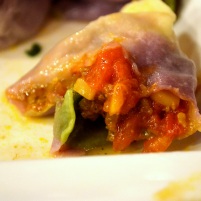 And that’s all, folks.