In another round of ridiculous October meals in New York, my friend Yang and I dropped by Corton, the two-star French eatery by Paul Liebrandt in Tribeca, that does exclusively tasting menus (of which you’re supposed to choose one of two, the seasonal or the regular one).  Tasting menus (ones as elaborate as Corton’s, anyway) are a marathon, requiring pacing, patience, lots of conversation, and a willingness to be at least a little pretentious about examining the food, which mostly just involves me chewing and nodding my head slower and with more pregnant pauses.  But to be fair to Corton, it’s definitely more approachable and less intimidating than its Michelin stars and creatively austere menus might suggest.

We settled into Corton’s regular tasting menu, which began with a smattering of snacks and amuse-bouches: 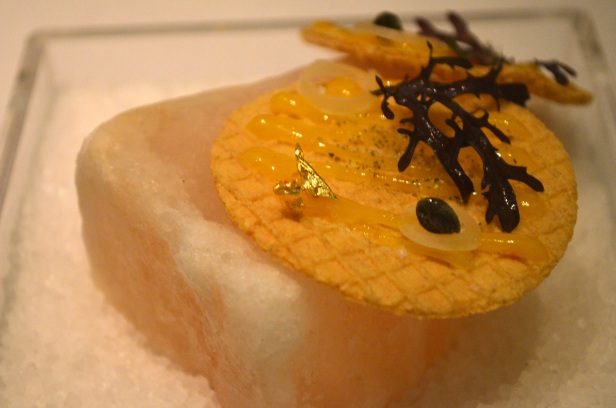 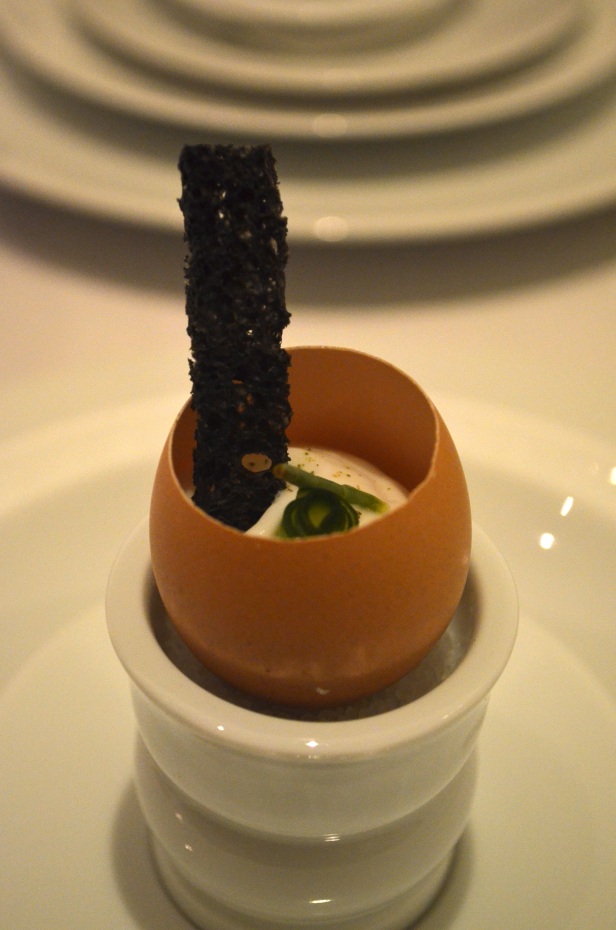 One of the amuse-bouche, really just a morsel of (potato) cracker, was filled with a rich Mornay sauce (think Béchamel on crack) with an overwhelming cheesiness.  and the cupcake-like snack was interesting in terms of presentation, with a soft cake set atop a bed of dark powder so that when you pick each one up, it took some of the seasoning powder with it, and as you place it in your mouth the bottom, with the powder, is the first thing that hits your tongue.  A good idea that I hadn’t seen often before, albeit probably pretty narrow in practicality. 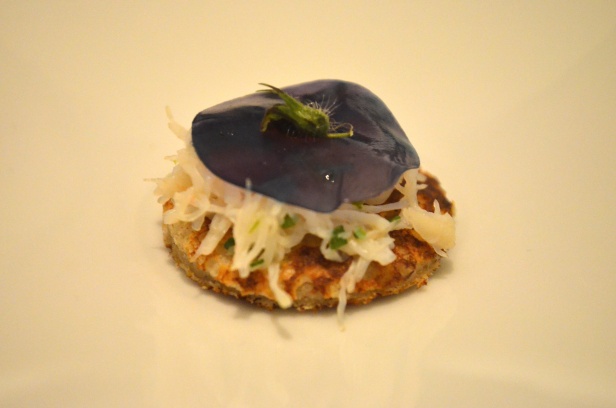 These few dishes all featured meat in spacially condensed forms – foie gras, langoustine, wood pigeon.  I’m still more partial to pan-seared foie gras than any other incarnation, but this bite was exceptionally clean and bright, as was the langoustine (in a less potent and fatty way). 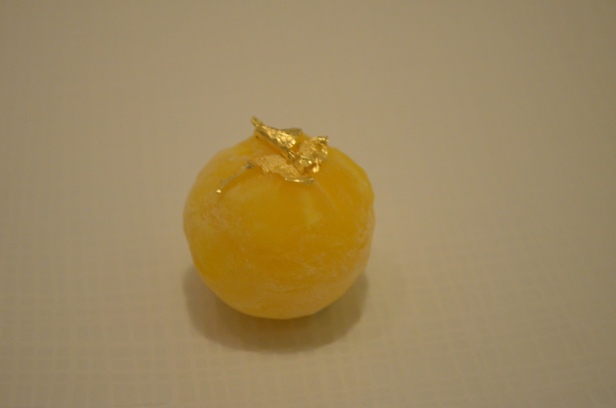 Corton’s mandarin mochi was one of my favorite creations of the week in New York – compact and unassuming, it was like a cold battery shock of citrus unleashed, flooding your senses with the tartness and tang of intensified mandarin just on the cusp of too much before fading.  Next came Japanese mackerel, a fish whose grilled odor is the only real downside to Japanese izakayas – but again, Corton’s version was clean and simple in flavor, without that typical oddness, like sardines.  It was paired with a small cup of milky broth (asparagus velouté?) with a gelee’d bottom – I’m going to refrain from making a fruit-at-the-bottom yogurt comparison, even though this sentence already crossed the line. 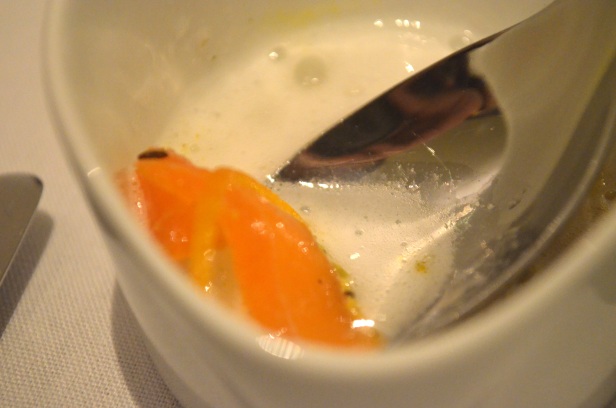 Our next adventure was beef three ways, which is about as sexual as it sounds: (1) tartare with naan bread, (2) 72-hour rib with BBQ spices, and (3) gelee with uni, with a piece of fried rind atop a bed of dipping salt seasoning.  Individually, I preferred them in exactly that order. 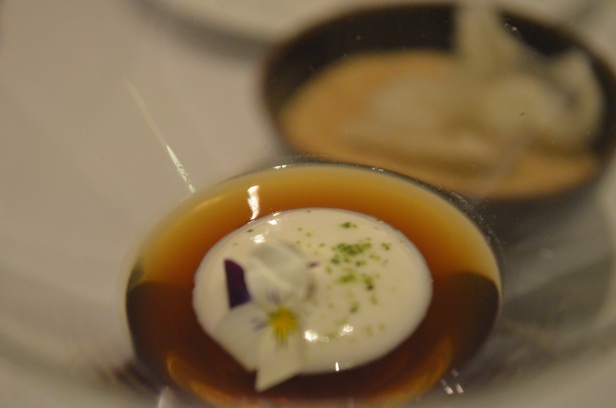 Overwhelmed with savory umami (the gelee was beef essence distilled and compounded by the uni), we transitioned into dessert with a plate of cheese (St. James Berkswell) with rind, date jam, and a lemon bar with malabar pepper.

My favorite dessert followed, a sponge cake with maple, sour cherry, coffee, and almond elements with toast-flavored ice cream (the bottom crust was especially tasty).  Then, a wafer of dark chocolate atop apricot syrup, and a smattering of small dessert bites (candied fruits, chocolates, a macaron).  By the end of the chocolate leg of this particular marathon, we were stuffed and exhausted.  In sum, from technical and flavor perspectives, the Corton tasting menu was a very interesting journey; compared to other lengthy high-end menus (notably Mugaritz, Arzak, and Benu), the story wasn’t as quite as clear or powerful, and the highlights weren’t quite on such a high order of perfection as those noted restaurants.  Nevertheless, there were quite a handful of innovations and incredible flavor notes that excited and/or surprised, and on these sort of risky culinary rides, this one ended really quite well. 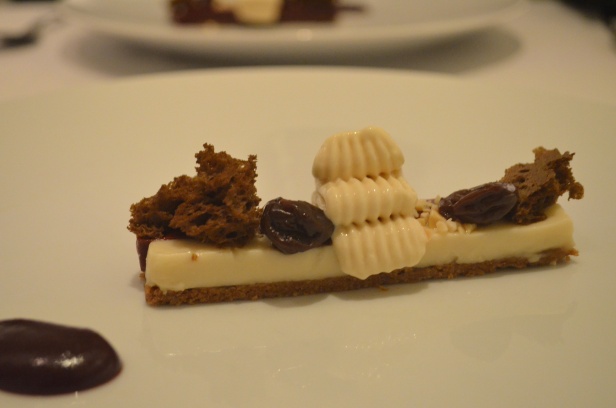 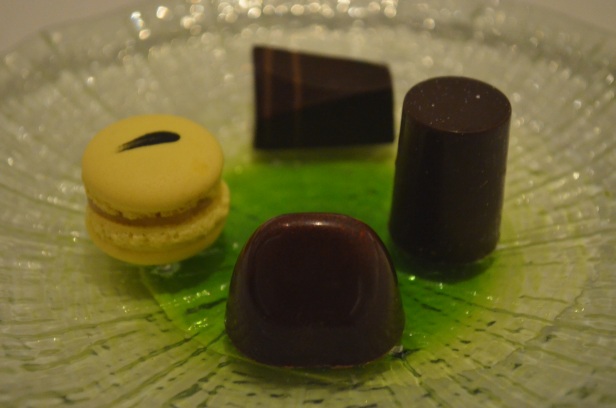