A few weeks ago, I met my friend Shuang for lunch at Casa Mono, the much-praised Spanish-themed restaurant near Union Square, whose backers include the estimable Mario (Batali) and Joe (Bastianich), the same duo who along with Nancy Silverton created one of my favorite LA eateries, Pizzeria Mozza.  During the afternoon, even with the windows open and interior well-lit, the space looks cozy, and at times a bit cramped.  The small, open kitchen seemed to be shifting between wrapping up lunch service and starting prep for dinner – in any case, the restaurant was slow, quite, and for those reasons – rather enjoyable.

The menu was evocative of my time in San Sebastian a year ago, but the chef’s inspirations and history trace back to the Costa Brava, on the other coastline near Girona and Barcelona.  I’m not well-seasoned or -traveled enough to know the differences, only that some things on the menu looked more familiar than others.  Our appetites (voracious) and the chill of a New York autumn steered our cravings towards heartier things, but in general the menu was a bit more complex and expansive than the simpler flavors of briny anchovies and bacalao and roasted red peppers and jamon that I recalled of Spanish tapas. 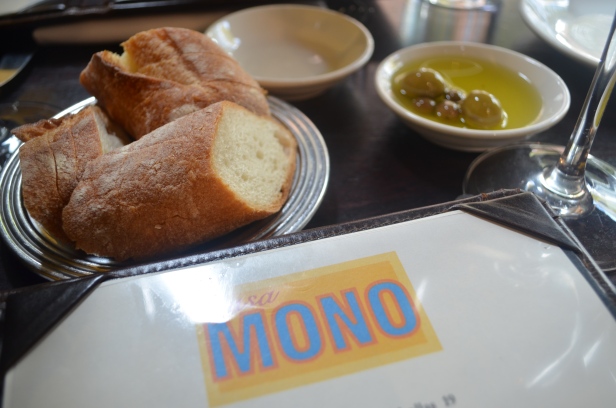 One thing that immediately stood out was the seafood’s freshness which, while not entirely comparable to Mama’s Fish House, showed through modest seasonings and grounded preparations, by which I mean to say that there weren’t any foams, sous-vides, or something-three-ways.  The razor clams, smoky from the grill, were like a blunt, brutish version of escargot, less refined in a good way.  The croquetas were bursting with rich, salty cod flavor, albeit tempered by the aioli.  I do like bacalao a lot, but more so in an unbattered and unfried state (don’t hold me to that, though).  The harissa on the calamares was the only spicy note of the meal, and reminded Shuang and me of sriracha, which may or may not speak to my level of sophistication when it comes to sauces. 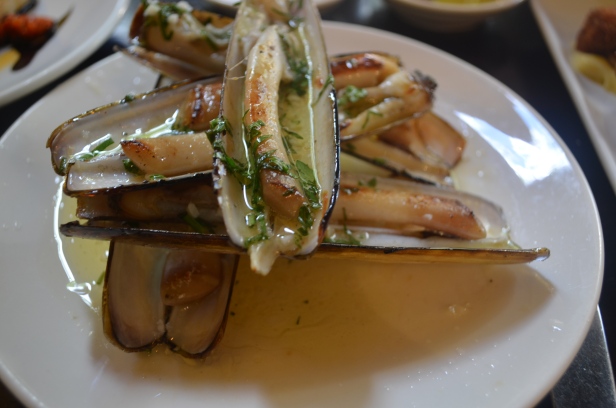 The heftier portion of the meal was dominated by this delicious bone marrow, each bone topped with pesto and served alongside crisped bread (there’s no better compatriot for the unbridled debauchery that is bone marrow than really greasy bread).  Then there was a pork belly dish with octopus, grapefruit and pork rinds.  These came with another extravagant thing we ordered: duck egg with jamon iberico, black truffle, and roasted potato, essentially a petit perversion (in all the good connotations of perversion) of an English breakfast.

That last shot makes me want to do dirty things.