I have mixed feelings about brunch.  It’s sometimes a pompous social excuse to start drinking and act like douches.  And I know I’m overpaying for eggs.  I get that it’s a great way to restaurants to juice margins and give their dinnertime staff a break.  It’s just that the food usually isn’t as exciting as the dinner menu.  New York offers to full spectrum of brunch-friendliness, some excessively clubby and bro-y, some relaxed and homey, others a bit more formal (sometimes elevated).  Nobu does brunch.  The NoMad does brunch.  Marea, a two-Michelin-star restaurant with a crazy decadent octopus and bone marrow fusilli, has a brunch menu (the fusilli is on the menu).

But it sure is comforting.  It just feels good.  There’s something uniquely satisfying about rolling out of bed at 10:30 (or later), not dressing particularly nicely (in my case, haha), and getting a gussied-up omelette or some butter-charged pastry or fried chicken and waffles, and just enjoying the feeling of the weekend.  That’s probably more what it’s about, an unspoken celebration of things that only a weekend allow.  Relaxed conversation and an expensive juice (maybe with champagne in it), living as if on a staycation in the city.  It’s a chance to enjoy the sunlight and the crisp air of the late morning, when the weather’s nice, or to see friends without the formality of dinner.  It also makes me fat and lazy, and that feels great.  Sometimes, anyway.

Andrew Carmellini does a mean brunch.  We’ve been to the Dutch (menu) more than a few times, for lazy weekend feasts, fried chicken dinners, and a few decadent lunches on days when I was less than fully employed.  Jason Hua and company do good work there.

Soft-scrambled eggs with cured salmon and a sesame bagel.  Fat margins be damned when it comes to butter and eggs.  The Dutch also has some tasty pastries as well – a mildly sweet berry tart, and a tart and gooey peach pie.

And his NoHo spot, Lafayette (menu):

Again, great pastries (the bread basket, with overly flaky and butter croissants) and some heavy All-American action – like a thick burger dripping with cheese on a brioche bun, with a side of crisp fries and candied bacon.  Not pictured, but there’s really tasty (and ridiculously expensive) juice – I had a carrot yuzu something that I could’ve had three more glasses of, if not for the exorbitant price.

On to the next, as they say – Maison Premiere (menu), the hipster seafood-and-drinks enclave in the thoroughly gentrified Williamsburg corner of Brooklyn.  We visited during fourth of July weekend, when the weather was gorgeous and the back patio was bright and lovely and dandy.  Another fantastic bread basket fortified with butter; dollar oysters plump, cold, and crisp; even a Thai iced coffee to go with my steak and eggs.  Myra got an order of duck hash, everything came with wonderfully soft-boiled eggs.  We also got a side of potatoes and really great smoked meats (the bacon was great, the sausages were a little more herbaceous than desired, but hey, when the bacon’s charred and thick-cut and delicious, then all is forgiven). 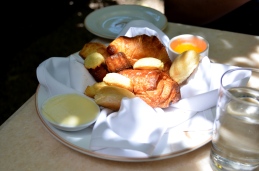 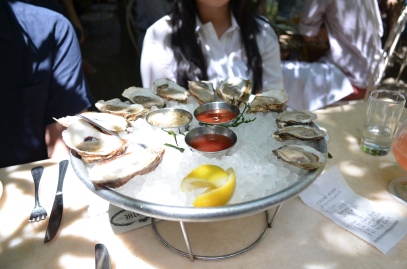 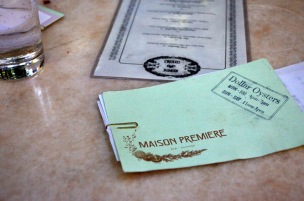 If you’re out in Williamsburg, there’s also a neatly constructed brioche breakfast sandwich at Paul Liebrandt’s The Elm (menu).

Danny Meyer and Nick Anderer also have a pretty decent brunch spread at Gramercy Park’s Maialino (menu), which has a well-known brioche bun with sticky toffee frosting (with or without bacon), but the whole pastry section is probably quite good.  We also ordered the banana loaf with maple pecan butter.  The sides of meat – house-smoked pancetta and a cheesy pork sausage – were also tasty. 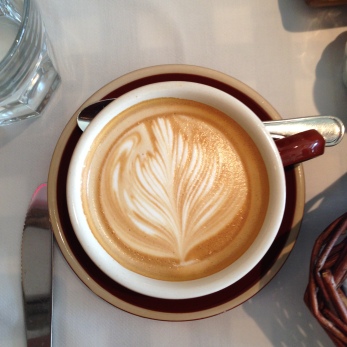 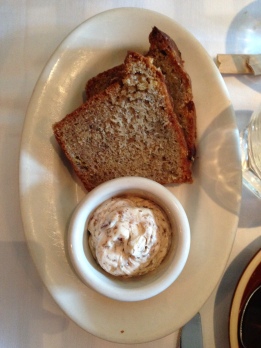 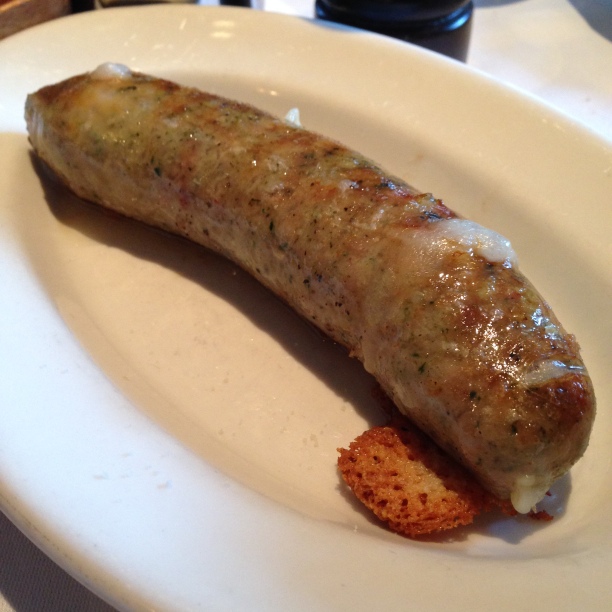 During Christmas weekend, we headed uptown to Harlem for a jazz brunch at Minton’s (menu), which shares an executive chef with The Cecil.  Apologies for a fairly unappetizing photo of the ham and cheese sandwich, but it is stuffed with salty, smokey Surryano Ham, a smoked country ham from Virginian company Edwards Country Ham, and a very hearty multigrain bread from Hot Bread Kitchen, a New York City bakery with a mission to support foreign-born and low-income workers.  We ordered banana Caribbean toast, which didn’t come with syrup, but deeply caramelized bananas and candied ginger, the brioche toast like cake.  The brisket fried rice was enjoyable, but not particularly remarkable.  The dessert (cornbread cake with a hunk of caramelized pineapple, berry compote, and cornbread ice cream) and the live jazz were a lot of fun. 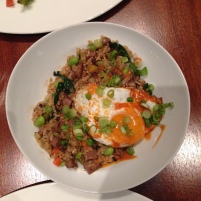 Last but not least: visits to Keith McNally’s people-watching hubs Cherche Midi (menu) and Minetta Tavern (menu), to tango with some infamous burgers, reputations of gourmet meat blends.  If you’re gluttons like us, then yes, by all means, start with an order of beignets with strawberry jam and nutella. 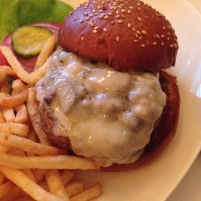 The sweet-sour beefiness of dry-aged goodness came through more on Black Label burger, and the caramelized onion spread was better than the bacon marmalade, mushrooms, and gruyere that topped the Prime Rib burger, but the kitchen at Cherche Midi did a better medium-rare with the Prime Rib burger.  The Black Label came out medium, almost medium-well.  And honestly, $28 is way too much for a burger.  $23 for a burger is also too much.  Even ones that come with shoestring fries as good as Mr. McNally’s.  Shake Shack is a quarter of those prices, and that makes a Shackburger at least as enjoyable.

God bless America and its ridiculous fascination with brunch.