If there was one impression about the setup at George Mendes’ Michelin-starred Aldea (dining floor, kitchen, and menu) I had, it would be conciseness.  The entrance was dark and inconspicuous, the hostess pointed us through to the back, adroitly navigating the narrow space to the six-seat chef’s counter in the back of the restaurant, where we looked into the bustling kitchen, inspecting the mise-en-place and the flat-top grill beyond that.  The chefs moved about with succinctness and efficiency, adding meats and seafood to the plancha when orders came through the passe, the cook on the left whisking away at stocks and purées.

A surprisingly abundant bread service kicked off the meal.  True to my roots, I chose the cornbread (there were some other options, as well, but who cares when there is cornbread?).

A little amuse-bouche that followed: beet purée and horseradish on a potato crisp.

We share a few appetizers.  Chef Mendes’ menu in many areas recalled Spanish and Portuguese references, brought home with a host of regional American ingredients.  This plate of Benton’s country ham, accompanied by a piece of bread with tomato jam, is the perfect representation of that.  And there was a generous serving of Benton’s, which I will never complain about. 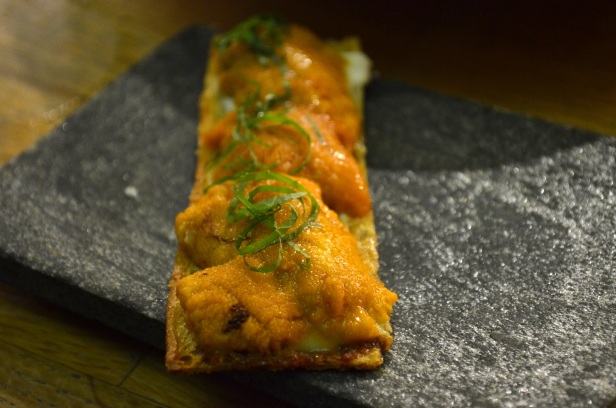 Spanish octopus with lemon squid ink, halved potatoes, smoked paprika, and some greens.  The octopus was tender and the bitter citrus combination of the squid ink was a good sauce, though I like my octopus with a bit more char.

Mussel soup with chorizo, fennel, and coconut curry.  A bit too watery and a bit too much of the acrid pungency of cooked mussels.  Aromatic, certainly, but just not in my ballpark of flavors. 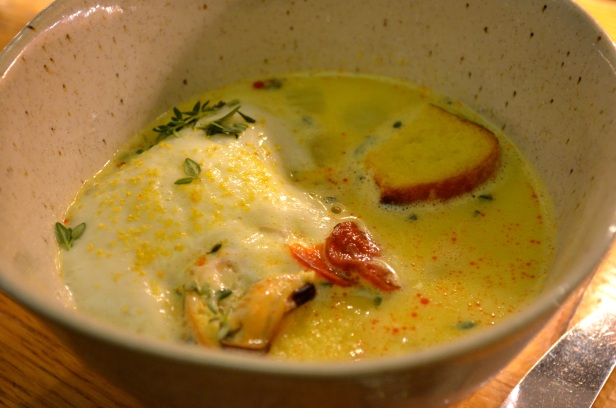 A Knollcrest farm egg with bacalao, potato crisps, and black olive.  The egg was soft-scrambled, and melted into the slightly-salted bacalao.  The crisps, tangled with a sprig of herb and morsels of black olive, were my favorite part.  This was a dish that ended in a flash, but was just perfectly delicate in both presentation and gustatory brevity.

We sat and watched the passe while we waited for our entrées.

Shrimp “Alhinho,” with garlic, coriandor, and what looked like crispy shrimp whiskers.  The soup was exceptionally flavorful (as the combination of shrimp and garlic tends to be), and the shrimp large and sweet.  This was Myra’s dish, so I just tried a bite.

I ordered the Chatham cod, with a soft-boiled egg, beets, beet jus, and greens, on a bed of corn purée.  This was a phenomenal dish – so many unexpected flavor and texture pairings and themes (the natural sugars of corn and beets, the creaminess of the broken egg and the corn,  the buttery fish and the rich purée), underlining the unobtrusive, pleasant sweetness of the whole dish. 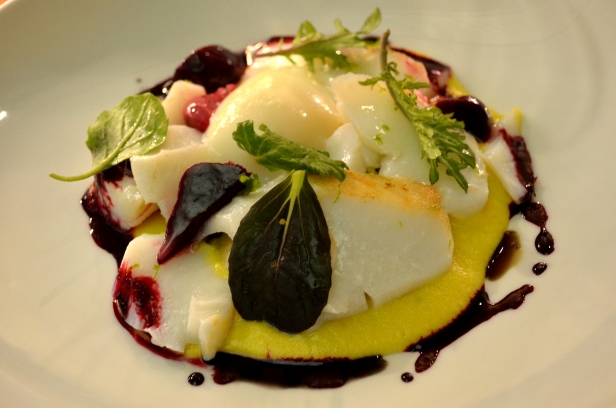 Sweet begets sweet, I suppose.  We finished with a bowl of Sonhos ‘Little Dream’ beignets with a trio of dipping sauces.  The salted caramel was my favorite (of course), but the lemon in the middle offered a bit of reprieve from the heavy food coma that was descending on me at that point.  The beignets themselves were interesting in that they were very airy, with a thin outer layer similar to some of those large sesame balls in the dim sum dessert section.  I don’t really know why I’m comparing those two things, but I couldn’t think of another similar food. 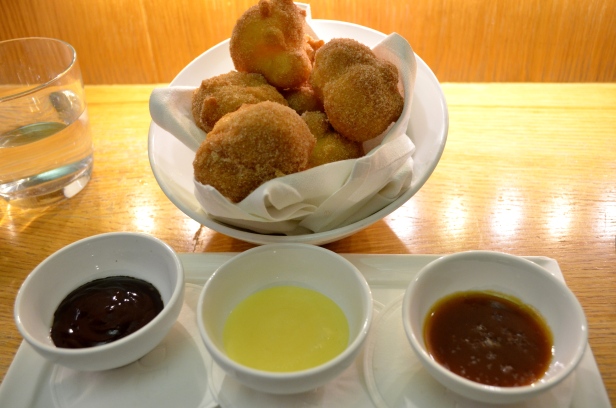 The dinner closed with those little candies, a thoughtful way to end the meal.  An enjoyable experience, for sure, with the Chatham cod as the unequivocal highlight of the evening.  The service was as good as I expected for one Michelin star, and the thoughtfulness of the dishes and the quality of the ingredients were evident.  I’m not sure I would’ve liked the meal as much if I hadn’t been at the chef’s counter, where I could lose myself in the action of the kitchen, but I’m willing to overlook a few misses, especially remembering that cod.

One thought on “Aldea: Dinner at the Chef’s Counter – Flatiron, New York”