What little research I did about Xishuangbanna outside of where to eat was about day treks.  With Pu’er tea fields, with some trees centuries old, and all those minority peoples whose histories date back way further, I really wanted to spend some time outside of Jinghong.  Via Lonely Planet, I found Forest Café, which led a number of different treks of varying difficulty and length.  I made some arrangements remotely with the owner to meet her brother, Stone, at the café on my first full day and finalize the plan.

Another out-of-town couple happened to want to do the Pu’er day trek on my last day in Jinghong, so Stone said to meet him back at the café then.

After an early morning bowl of noodles, I set off in the back of a bread van, the Chinese term for the narrow shoebox minivans that number many a Chinese street.  The driver had the good taste to have made a mixtape filled with patriotic Chinese songs about the Diaoyu (or Senkaku) Islands filled with anti-Japanese jingles, which made for an informative ride up Nan Nuo Shan.

The roads were bumpy and narrow, but in fairly good shape.  In about an hour, we were let out in this small village of slow-slung homes up in the luscious green hills, almost eye-level with the armada of clouds rolling off these hilltops towards God knows where.

From this quiet village with its skybound basketball court, we descended a bit into a valley, along a path lined with tall trees and short tea bushes, and the occasional pop of color. 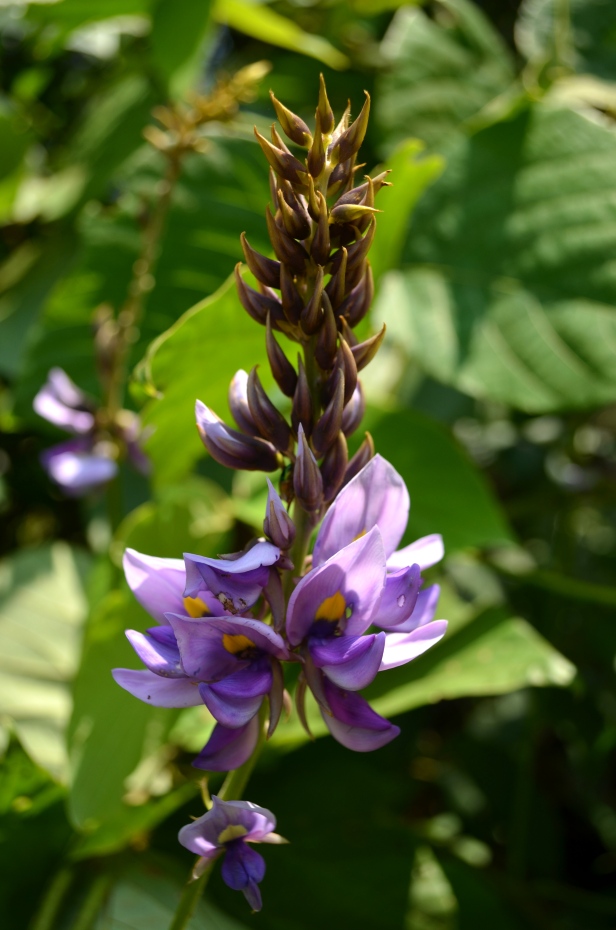 These blossoms, with their velvety white petals and yellow center, are the flowers of the Pu’er tree. 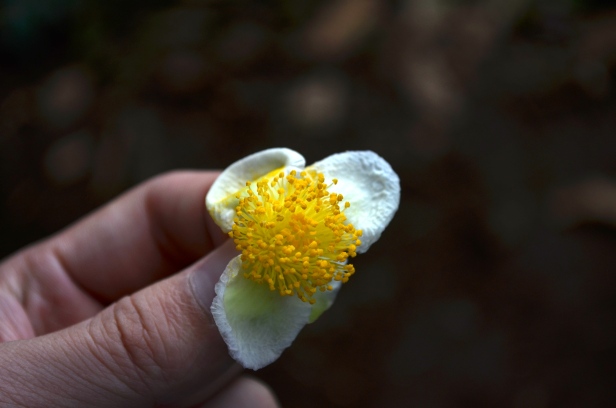 We also saw an array of mushrooms, as it was prime mushroom season.  Stone’s general advice was that if the insects didn’t bother the fungus, then it was poisonous to humans.

And this knobby, arched plant is some eight hundred years old. 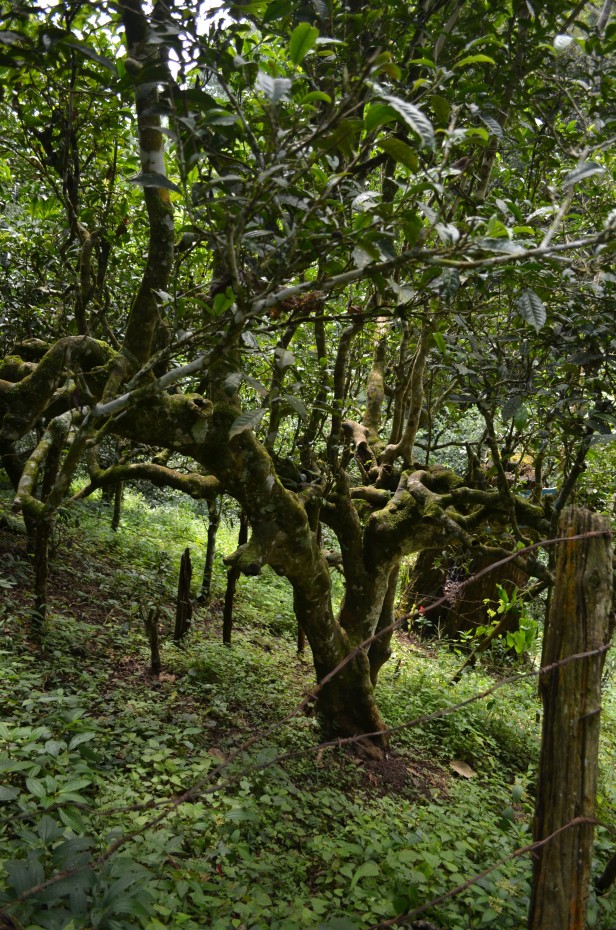 I don’t really understand in great detail the nuances of Pu’er tea flavors (other than the stark contrast between raw and ripe), but there’s something about age that makes the tea leaves more unique.  The leaves are meant to be picked shortly after budding (before they develop this waxy outside layer).

And then we stepped into this lady’s treehouse for a tasting of raw Pu’er. 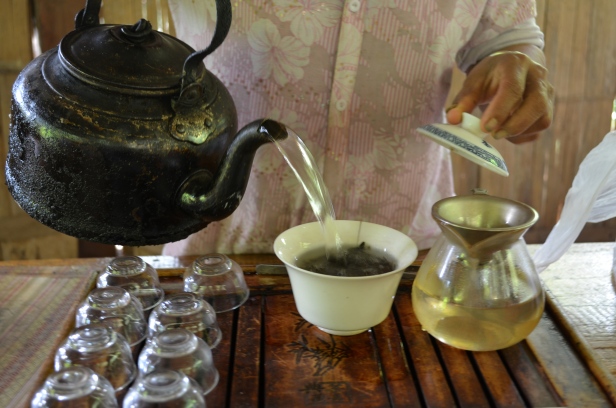 The tea was tasty, supposedly a raw 2011 that had been marginally naturally fermented.  There’s a subtle sweetness coaxed out by multiple steepings and from the process of pouring from the kettle to the large cup to the glass pitcher to the small cups.

From there we trudged onwards, into a clearing from which we could see far in the distance the colorful roofs where we started and this valley of arrayed layers of tea trees, shadows and a lush, almost tropical green, 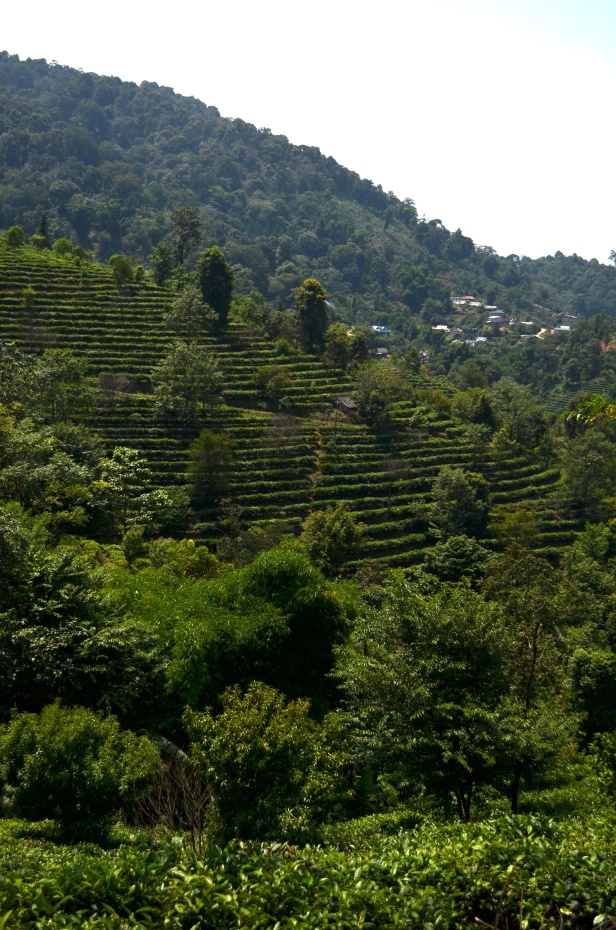 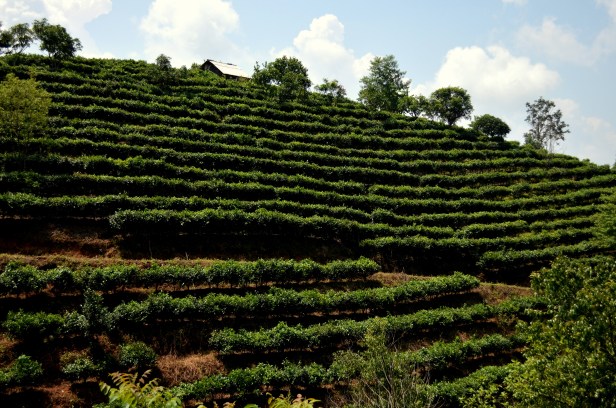 We had lunch sitting amid these breezy hills in between rows of Pu’er, some flowering, others just barely teasing the air with the fragrant hush of new leaves.

After lunch we soldiered on, until we arrived at a quiet house with a deserted courtyard.  Stone yelled for a lady, and from the mid-afternoon shade of the upward-tilted Aini roofs, a kind but weathered face shuffled out and set about arranging a tabletop of teacups and hot water for the last tasting of the day.

On the wicker tray, loose tea waits to be packed, a scene of action interrupted by the mid-day heat.  Below this large puck of raw Pu’er tea is merely for show.  A drinkable puck would be wrapped, usually in something breathable, to allow it to slowly ferment but without direct contact with the weather and elements. 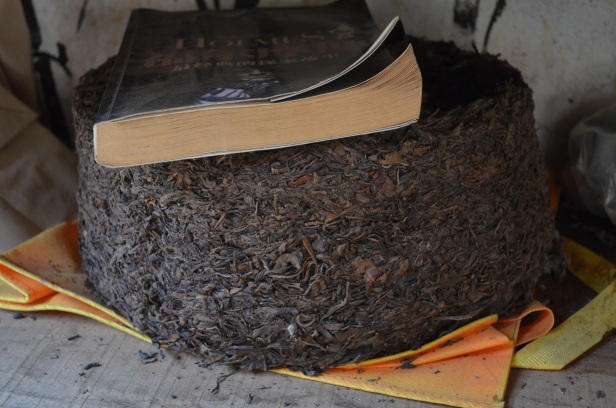 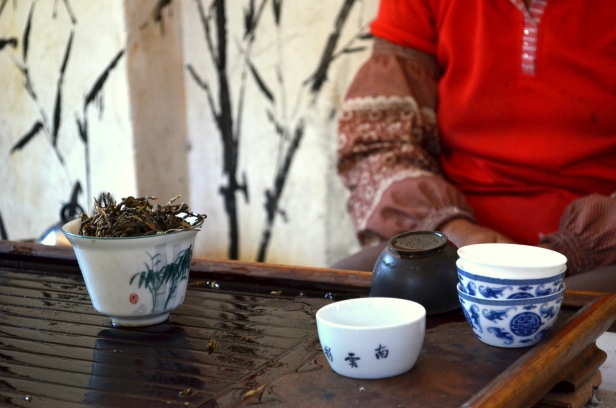 In this simple ceremony, this exchange of pleasantries and the slow sips of dried leaves unfurling its flavors drawn up from this elevated earth.  It was easy to be immersed in the beauty of the Pu’er country and the lugubrious pace of life, revolving around the harvesting and drying and roasting and packing of tea leaves, and the simple luxuries of life lived out in the open air.  It was just as easy to pass through, to enter and exit, a distinct but aloof hospitality in the eyes of our few hosts, an ephemeral smile of welcome, a slight bow and a tipping of teapots.

2 thoughts on “A Journey Into the Clouds – Nan Nuo Shan and Pu’er Tea Fields, Menghai, Yunnan”