XO Tours‘ foodie tour came highly recommended from Winston, a friend in Shanghai who’d eaten his way through Saigon last year.  We were disappointed at first – the tour was fully booked all three days that Myra and I were in town.  However, two spots opened up last minute and we eagerly jumped on board.  Around 5:30 in the afternoon, two cheerful ladies picked up us on scooters and after a brief introduction, we zoomed off to our first stop, a beef noodle soup place on the side of the street (I’m not sure where).

Riding in the back of a scooter was a fun first.  Just so you know, I have strong thighs, and I’ve been working on my core, so I definitely didn’t have to hold onto the bike with my hands (most of the time).  Also, my tour guide warned me not to hold onto her, which I guess would’ve been a little creepy for her.  But mostly, it was core strength.  Like a true professional (Vietnamese guy).

Ben, the group tour guide, met us at the noodle soup stall, and explained a bit about bun bo hue: bun is the round spaghetti-esque rice noodle (as opposed to the flat-shaped pho) and bo is beef (the soup as well as slices of cooked brisket), with a vinegary savoriness.  The hot bowl served to kickstart our appetites as well as line our stomachs. 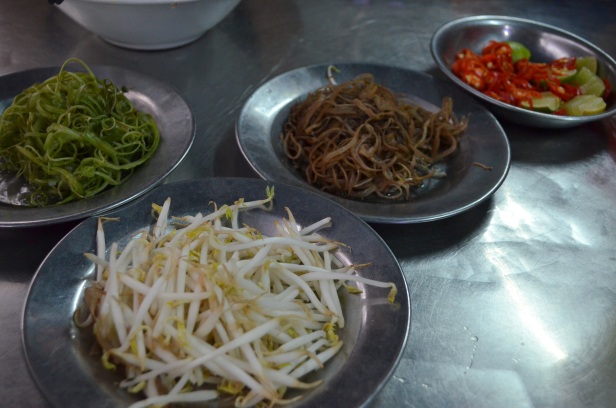 There’s a whole lot that I enjoyed about the food experiences in Vietnam, but one of the more fulfilling details was how simultaneously fresh and copious the garnishing dishes were: the bean sprouts, the basil & mint leaves, the chopped peppers, etc.  It was such a departure from the careful, miserly arrangements that we’d seen in China and sometimes even in the States, as if a little celebration of the bountiful land.

Next, we headed to an outdoor barbeque joint, where we gorged on smoky bits of goat breast, okra, shrimp, squid, and frog.  I sampled a bit of sugary Spark energy drink (it was a recurring theme that my personal guide, while incredibly hospitable, kept urging me to try suspect things over the course of the night), as well as monkey wine (banana wine). 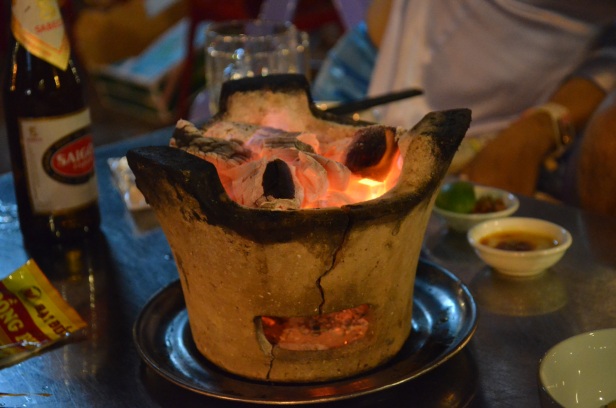 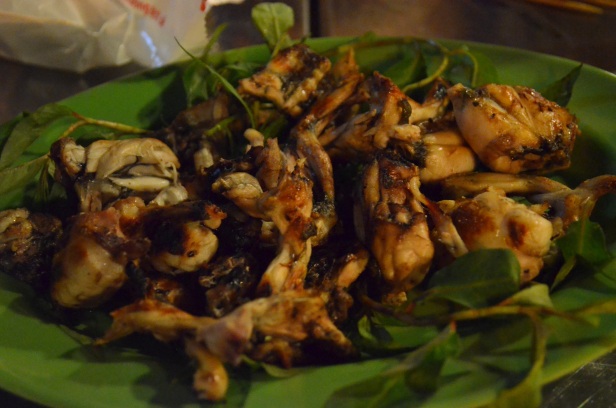 The flavors were rich, reflective of the quality of the meats and seafood – the shrimp in particular, succulent and sweet.  The squid was also tasty, with a deep char I associated more with octopus but which worked quite well since the squid itself was flavorful enough not to be overpowered.  On the way out, we passed by some riverside gas stations, which rent space and lawn chairs on the dark banks to young couples in search of, ahem, personal time away from the bustle of the city and their cramped homes where the three or four generations squeezed into an apartment do not afford such privacy.

Then we spent some more time on the road, shuffling between other districts of Saigon. Chinatown, with its mecca of a wholesale market and a bustling Cantonese population. District 7, with its shiny new apartments and Western outlets.  The whir and phantoms of fluorescent carts and small hunchback vans and families playing badminton in the parks and street corners rushing past us.  There isn’t a distinctive line or border demarcating the districts, but there were moments in which I felt the scenery shift, especially as night settled in.

Our last stop was another street-side eatery, somewhat indistinguishable from the other places along the block.  We were treated to more seafood and meat: grilled quail, a Vietnamese version of chili crab, scallops topped with pork-fat-fried scallions & peanuts, clams in a sweet citrus-y soup, all washed down with cold soy milk. 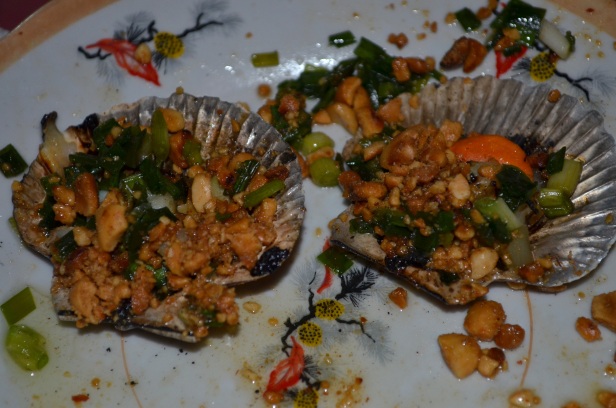 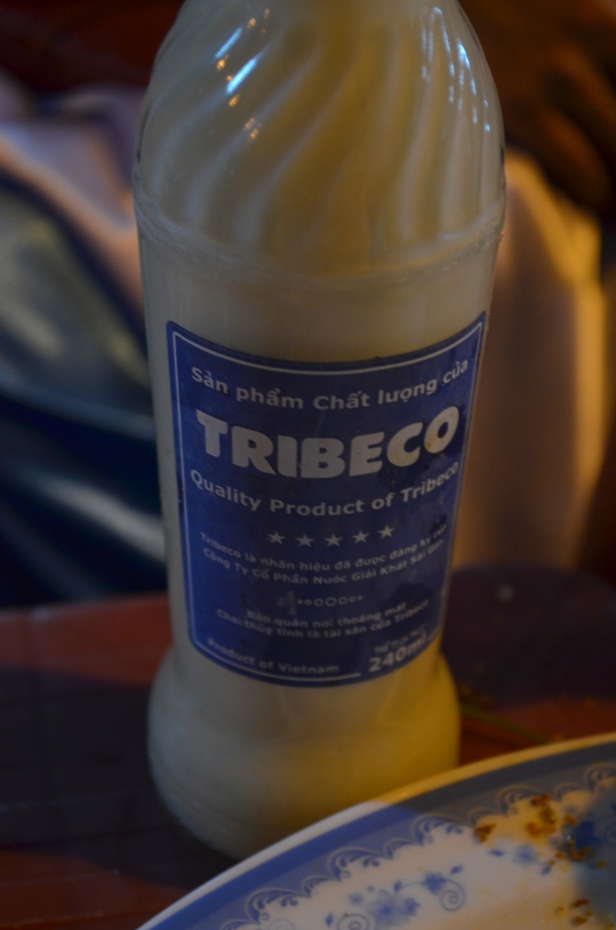 The scallops were a surprising and phenomenal discovery of flavor and texture profiles – the slightly briny scallop, the oily-crunchy umami of peanuts and scallions, and the tang of the spoonful of chili fish sauce that our guides added to each bite.  The crab legs were amazing as well, flaky and sweet, perfectly paired with the sweat-inducing fire of the chili seasoning.  We finished with a pair of desserts, a coconut jelly and a creme caramel of sorts:

The other thing that made this last portion of the tour memorable was the balut, which is a duck egg that has been fertilized and let develop just enough to have a defined baby bird inside the shell.  I’m not going to go much into how it all transpired and the details of each bite, but to warn you, the next two pictures can be a bit stomach-turning.  So before they come up, I couldn’t say enough good things about the whole tour experience, which not only allowed us to see and access parts of Saigon from an otherwise unreachable perspective (scooter-bound), but also humanized it in a sense, by keeping us rooted in delicious but common-place food experiences, something shared with city-dwellers without feeling intrusive.  Our guides were incredibly friendly and hospitable, both at the table and on the road.  The tour was for both Myra and me the highlight of our Saigon stay.

And now the balut: 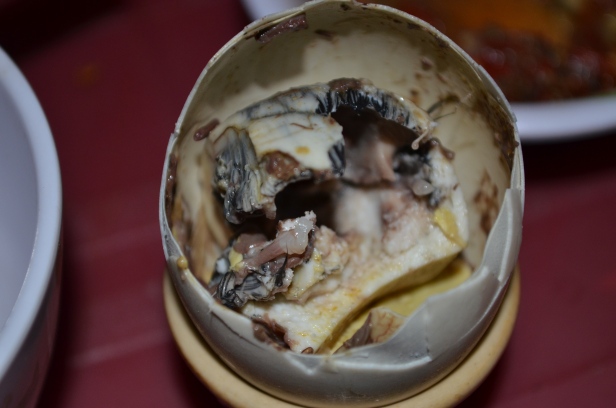