On my first night in Jinghong, the major city of the Xishuangbanna region of Yunnan, after checking into my dinky hotel, I wandered out toward the narrow downtown streets in search of a 烧烤 joint.  Some parts of the city sleep late, the slow, tropical life drawn out into the cool, beer-filled night and the husky smoke of skewers barbecuing over glowing coals.  I found a spot along Jinlu Alley, across from a park of elephant statues and a field of (probably drunk) men playing some game like petanque, but with spinning tops.

The restaurant didn’t inspire the utmost confidence, but there were a few occupied tables of twos and threes happily munching away, and the spread looked pretty fresh, so I ordered a small batch of things.  I went to the convenience store next door to buy a drink, and sat back down for some grilled squid, tofu, and shrimp, along with a plate of Jinghong-style stir-fried rice noodles (like pad thai, but with lemon juice vinegar and ginger and dollops of backfat instead of sweeter citrus). 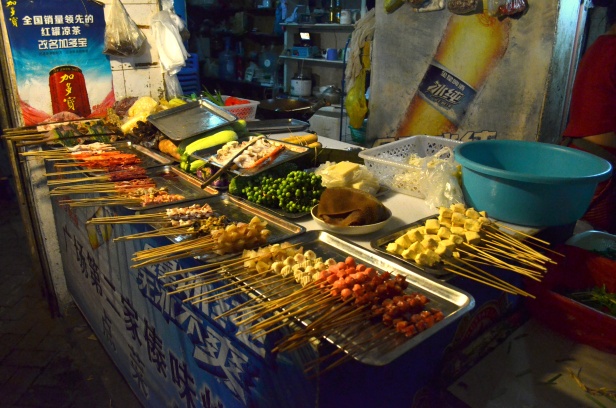 The squid came charred, chopped up and doused with a layer of mild chili salt, a satisfying spiciness that built up in your sinuses.

The tofu squares and the shrimp also had the same seasoning, a hint of cumin residing underneath the bright chili flakes.  All three I ate with a chili & lime juice sauce.  All these flavors were indicative of Vietnamese and Laotian influences, not unlike seafood and a lime-white-pepper combination that I’d been treated to in Ho Chi Minh City. 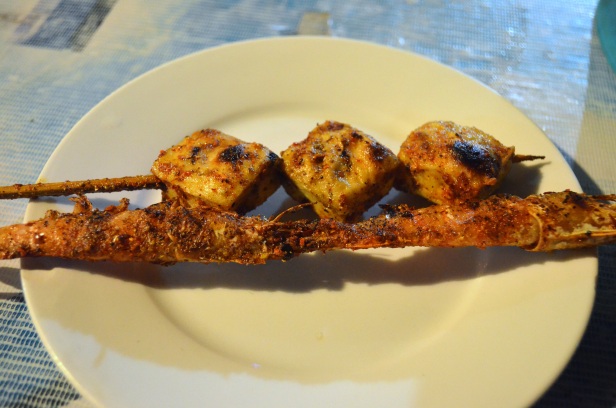 A pretty scrumptious first night in Xishuangbanna, I must say.  I had to go back to the convenience store for another drink after I spent most of the first one dousing the budding fires in the my mouth.  But the chili-induced sweat was good, and in the mild humidity of a late summer night in Yunnan, not at all unwelcome.  The spice made for a pleasant stroll home.  Full belly, clear sinuses, can’t lose.