Other than two stupendously impressive meals at the NoMad, Amali was the most pleasantly surprising of my New York dinners in August.

It was a quiet Sunday night, and we settled into the cozy dining room, with its long stretch of wood-paneled ceiling and plush chairs.  The space felt relaxed, if not a bit restrained, perhaps a function of its location on the Upper East Side and, you know, Sunday night, blegh.

We started with a cherry salad with jamon Serrano and hazelnuts.  I think in name I was attracted most to the cherries, which when they were found, gave a perfect tingle of acidity to the luxurious ham.  Alas, the cherries were a tad hard to find. 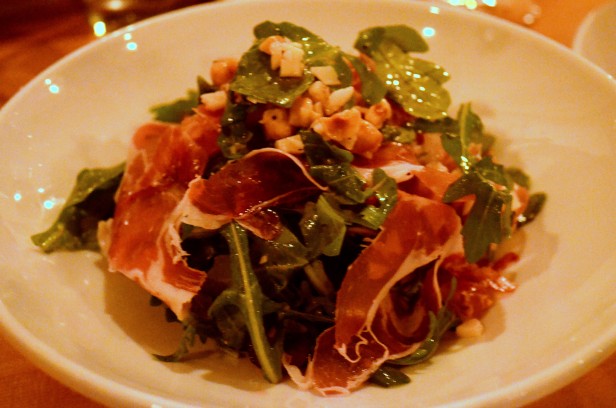 Then, grilled eggplant with Calabrian chili honey vinaigrette, sesame, cilantro, and yogurt.  This was a fantastic dish, reminiscent of all the smokey, creamy sharpness of the smashed eggplant from Paris’ Jewish quarter falafal joints.  This one had a much more Mediterranean feel, and the honey and cilantro lifted the dish up.

Grilled octopus has been everywhere this year, even in Shanghai, courtesy of Mr. Vongerichten’s Mercato.  Amali’s version is almost a salad, with halved pitted Castelvetrano olives and cubes of Yukon potatoes.  The perfectly cooked octopus comes with oily, strongly flavored olives, which is one of the best flavor combinations I can imagine.

Here is a rather terrible photo of the fried cauliflower, which arrived freshly battered and fried, melting the shaved cheese, crunchy and deeply satisfying. 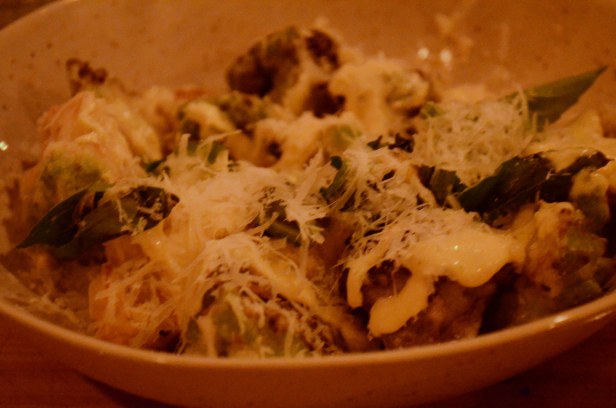 After appetizers, our pastas and the roasted chicken under a brick hit the table.  I don’t remember the kind of pasta this mushroom-and-seared-lobster-in-cream-sauce was – agnolotti, I think.  The second pasta was a green pappardelle in lamb ragu with black olives, which was excellent in pillowy handmade-pasta texture and richness, offset by the funk of the black olives.

And the chicken.  What a sexy demonstration of marvelously crisped skin and succulent dark meat.  The roasted cherry tomatoes offered some balance, as if that’s something I could possibly be into while eye-humping this gorgeous mound of brick-loved poultry.

We got a little greedy with dessert, too.  Chocolate brownie with caramelized peanuts, salted Dulce de Leche, and banana gelato.  Salted caramel and its cousins are the grilled octopus of dessert menus.  And like its appetizer menu cousin, it has my full gustatorial support.

Ricotta doughnuts, dusted with sugar and neatly arranged on a layer of (chocolate?) cremeux.  I didn’t need the cremeux after all that I’d just stuffed down my face, the doughnuts themselves were great.

This I think was the lemon ricotta poundcake with quenelle’d semifreddo and hazelnuts.  Surprisingly light, the lemon and the ricotta having tipped the scales in their favor. 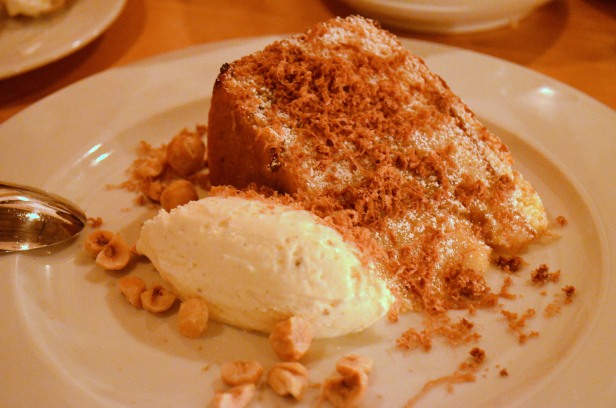 The price tag on some of the dishes, given the portion size, might have felt a little high, but because we shared so many things, in a group of four or so, it wasn’t so bad.  I’d absolutely go back, perhaps to check out the lunch menu deal.  Or for that bricked chicken.