Myra and I have been frequenting the new Vietnamese place down the street from our apartment.  It must be a prerequisite of all Vietnamese places, namely pho shops, that the name of the restaurant be a lousy pun.  Before they can begin to think about the menu and location and all the other silly little details, any Vietnamese restaurant owner must first find a reasonably punny title for their upcoming pho project.  Sorry, any self-respecting pho shop owner, that is.

Frankly, I just want a good reliable Vietnamese restaurant without having to feel like an idiot when referring it to friends or typing the name out on any device with a screen.

So I resolve to type it out once and then not to refer to the place by name in the rest of the post: Pho-Tastic, on 1097 Wuding Lu across from Laowang and down the street from Enoterra, Le Cafe des Stagiaires, Lab, etc.  Right next to the gas station.

We ventured upstairs once but the staircase is a dauntingly steep and not worth the fuss if there are seats downstairs.  As for the food, I suppose I’ll have a much better point of comparison in about two weeks when Myra and I head to Ho Chi Minh City, but I found the beef pho and the pork chop (the other thing I usually order, with either rice or bun noodles) to be pretty reliably tasty.  The soup isn’t complex or unique, but a squeeze of lime and some peppers help you deal with it.  The noodles are consistent, slightly salty, and the beef balls are potently savory in that fried garlic sort of way. 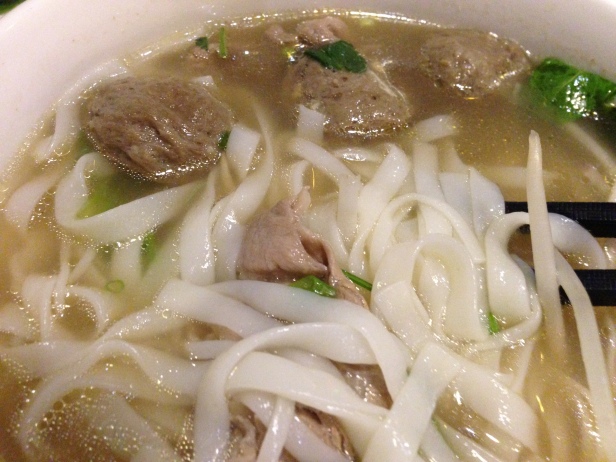 During lunch, the set menu comes with a few fried spring rolls and pickles, and the pork chop rice set comes with a small bowl of the pho soup base.  At first, it also included the banana pudding (which is delicious), but since it became an extra, I stopped ordering it, if only because after the rolls and the pho, I was pretty full.  Most of the time, the pork chop is tender, with a light coat of sauce (I’ll forgive them the one or two times they’ve overcooked it).  Add a little fish sauce to the rice, if you aren’t against fish sauce.

We’ve been frequenting the place during the course of its seemingly unending soft-opening period, and despite the occasion game of tag that their wait staff will play behind the bar, the service is prompt and conveniently out-of-sight, much appreciated in the restaurant’s small quarters.  Dinner is slightly pricier, since the set menu is not available then, but we usually get the same thing anyway.  It never blows me away, but it’s become a go-to spot for something quick, easy, reliable, and still soothing.