For Myra’s birthday, we went to Goga, a very well-received, California-inspired eatery in the French Concession.  At street-level, the restaurant is a small outfit, a handful of dining tables with a few squished seats at the bar – at the intersection of a few nondescript streets and across from a Lawson’s convenience store, the restaurant seems to revel a bit in its humble surroundings. 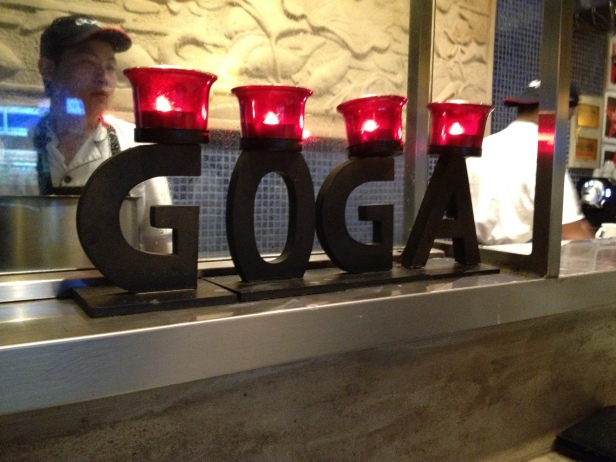 When I first got to Shanghai, she’d given me a one-week runway until I got sick of eating Chinese food (I’m not sure what she thought I ate growing up in a Chinese family).  My second week here, I spent some time in Hunan; Myra swears I came back clamoring for Western food.  And I suppose I was, but part of it was having to eat the same garlic-and-pepper-laden dishes and some sketchy roadside cafeterias (a generous label for what were basically gas stations serving food).  That’s the story I’m stubbornly sticking with, anyway.

No, but seriously, I’m back on the Shanghai grind (Chinese classes started two weeks ago), so in spite of the Hunan trip, I am eating Chinese more often than not (and liking it).  But the good thing is that when I do get a hankering for something more upscale American, Goga is a bona fide go-to spot.

The food was generally very good (my only complaint being the particular cut on the spice-rubbed KC ribeye steak).  Was it worth the city-wide acclaim?  Perhaps by comparison to the other California-themed food here (Element Fresh, California Pizza Kitchen).  On absolute terms?  Maybe.  But I didn’t go in expecting Ad Hoc or Benu, so I came away happy.

What was particularly memorable about our dinner were the sauces.  The lemon tarragon aioli on the West Coast lobster roll was an excellent contrast to the mayonnaise-y or buttery lobster rolls I’ve had elsewhere, and paired with a buttered chunk of corn on the cob.  The miso soy mustard that came with torched tuna tataki reminded me of a Thai peanut sauce and went surprisingly well with a neatly sliced slab of tuna, with furikake adding texture.  If I order salads at all, I prefer them messy, and my favorite salads are either sweet or savory (like an arugula pear salad or salad lyonnais).  That’s why I liked the sweet dressing on the duck confit salad (raspberry vinaigrette?), because it worked with the greens and the savory, crisped duck as well. 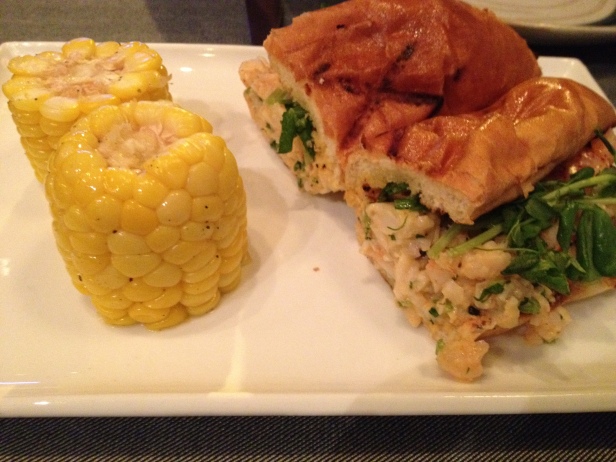 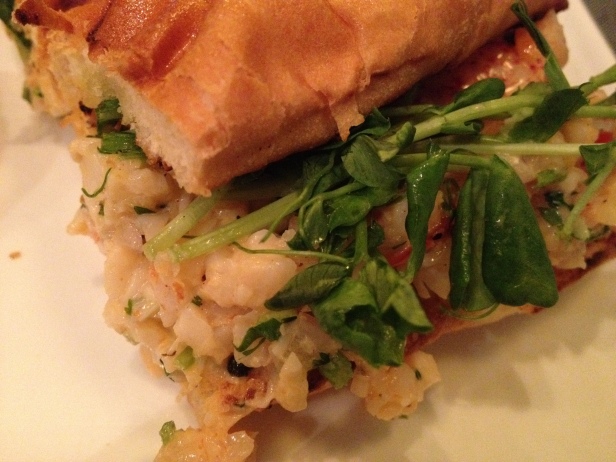 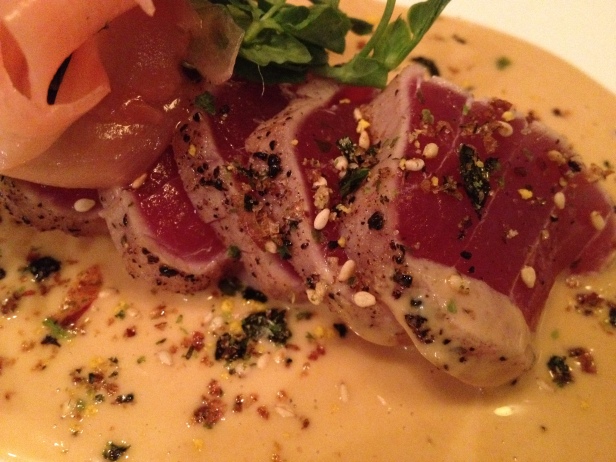 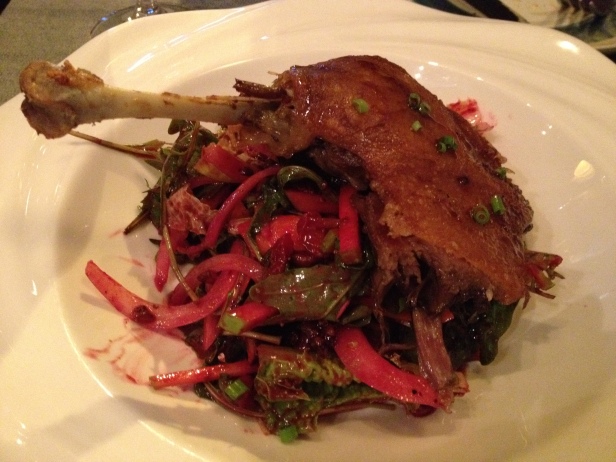 The KC ribeye was nicely charred, but just a bit much in quantity after all of that (just as the host/waiter had warned).  I don’t remember much about the horseradish sherry gastrique, but the candied bacon and duck fat-roasted potatoes were tasty. 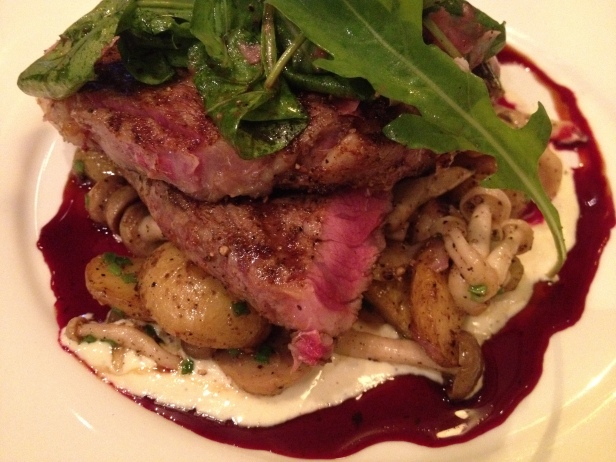 Myra’s been to the restaurant a few times before, enough for Goga to be very generous with wine and a complementary chocolate mousse for dessert (complete with birthday candle).  At first, I was really confused, in part because we didn’t order the chocolate mousse, and because the host, just after bringing me the check and just before bringing the mousse, jabbed me in the ribs:

Me, rubbing my ribs: “That guy just fondled me, I think – oh, nevermind.” [as the host sets the mousse on the table, and immediately starts signing.  He gets through a full line of the song before I realize I am in fact supposed to join in.]

At least that explains the rib-jabbing.  Well, next time I get poked in the side, I will just start singing ‘Happy Birthday’, no matter what.  And I will expect some chocolate mousse for my trouble.

Recommendations:
(1) West Coast Lobster Roll, (2) Torched Tuna Tataki, (3) Duck Confit Salad, and (4) Chocolate Mousse
I hear there is an excellent off-the-menu cheeseburger, as well as outdoor seating on the restaurant rooftop on nights with better weather.