As my first dinner after arriving in Shanghai, Myra and I went to an old favorite – Din Tai Fung, the upscale contemporary Chinese concept with Taiwanese roots and famous for its xiaolongbao soup dumplings.  The brand has locations in most large Asian cities, and so far I’d been to a few of their shops in Shanghai, Hong Kong, and Los Angeles (in Chinese-populated Arcadia, just west of Pasadena).

The Arcadia outpost was a frequent weekend destination, but being an hour-long drive from our Santa Monica apartment, my roommates incorporated it into a three-activity outing called the Trifecta: (1) Din Tai Fung, (2) the gun range in downtown LA, and (3) an hour-long rubdown at one of the various (non-shady) Chinese massage parlors in nearby San Gabriel.

How did we come up with that combination?  Shut up, that’s how.

Anyway, our conversation with the waitress at Din Tai Fung often went like this:

Us: “And one of those…and that’s it.”
Her (quizzical look): “Are you…sure…you’re going to finish all that?”

First of all, why would you question my capacity for soup dumplings, waitress lady?  Second of all, hell yeah, we’re gonna finish all that.

The Portman Shanghai Din Tai Fung, the closest branch from my temporary digs in Jing’an, is kind of hidden in one of the corners of a square anchored by the Ritz-Carlton.  Generally speaking, upscale Chinese has been a difficult concept to jump on.  From experience, so many of the tastiest Chinese restaurants I’ve been to are either slightly grimy or aesthetically unimpressive, so I’m often skeptical about the idea of paying more for white tablecloths and presentation.  Attentive service and elegant arrangement are a nice plus, but usually second fiddle to getting my food tasty, quickly, and hot from the wok.

Yet Din Tai manages to do speedy and delicious well, and still offers the level of decor that most Chinese restaurants don’t make an attempt to achieve.  Not that I need that to enjoy Chinese food, but on occasion it’s a nice touch.

The soup dumpling theme seems to have worked well for going slightly upscale in a profitable way – it can be both comfort food and novelty item, delicate-looking enough but also easily produced en masse, versatile enough to hold all sorts of fillings both sweet and savory, and priced to not be prohibitively expensive.  For me, soup dumplings still feel more like a comfort food than a delicacy, but are a bit too rich in flavor and mouth-feel to be entirely a daily routine.  This Shanghai location offers a foie gras version not available in the US, so I splurged a little.

Stop shaking your head at me. 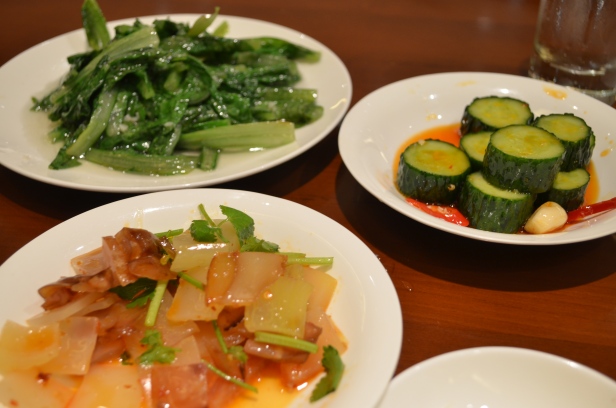 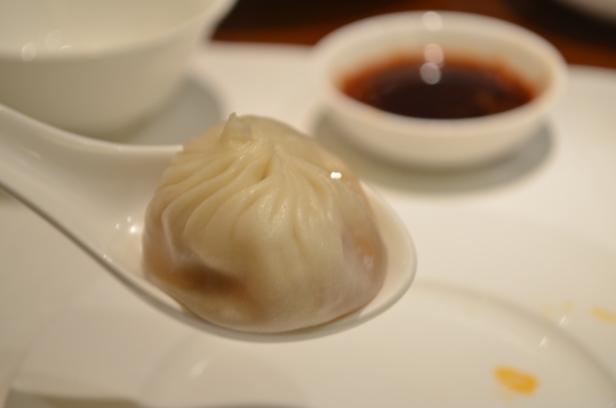 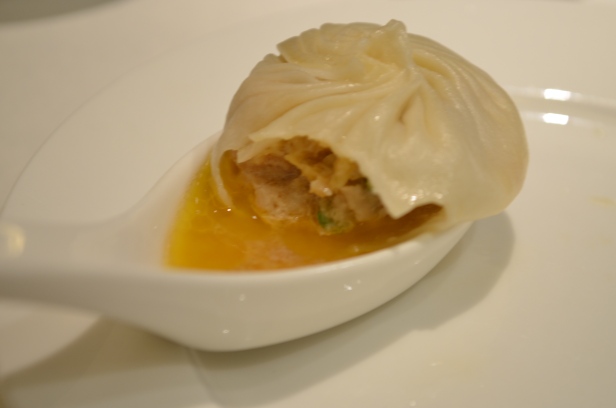 At the end of the day though, what’s the point of any Chinese food – hand-drawn noodles, braised pork belly, and dumplings – without the intoxicating risk of an upset stomach and runny poops?

I kid, I kid.  Some of the lauded food joints in Shanghai have a more notably Western feel (e.g., Lost Heaven, Pin Chuan) already.  I’ve felt a broader move towards brighter and cleaner and more modern – to be expected with new shopping malls and gentrifying neighborhoods, I suppose.  More than a need for any particular requirement for niceness, I’m just generally excited for affordable, contemporary Chinese cuisine becoming more conscientious of decor and of the design element of the dining experience.  I still enjoy private rooms and lazy Susans as much as the next guy, and the hole-in-the-wall shenjian place, but I’m excited about the popularization of good Chinese food that won’t require that kind of seclusion or for me to hold my breath when I use the bathroom.

Gonna be spending a whole lot of time with this munchkin, at least she’s a cutie (sound up)
Swipe for post-🍕🍔🍟🥗 food coma 😴
Slow-mo churro dip. Swipe and watch the last video for guest appearance from Olly.
Kāwibunga!
Being a tourist. Also, how do you pronounce ‘xuixo’?
In the Heights 🍝
Pre-show Korean BBQ. (the show being Sesame Street Live!)
Corporate carbs
Business lunch 🧳