Kashiwaya was my first three-star Michelin restaurant in Japan, and part of why I wanted to visit was its unique background: the kaiseki restaurant had been in existence and within the family since 1868, although only in its current incarnation since 1993, redesigned by its head chef, Hideaki Matsuo, a student of theoretical physics, and his wife around the nuances of the traditional Japanese tea ceremony when they took over the restaurant.  Relais & Chateaux has a really interesting short Q&A with Chef Hideaki.

Getting to Kashiwaya is a bit of an oddball walk southeast from the subway (Ryokuchikoen, on the red line, or Kandaimae, on whichever line that is).  It’s in a completely nondescript suburb, with low-slung homes and a profusion of uniform, narrow streets crisscrossing the easy hills of northern Osaka.

When we finally found its gate, it was a bit like stepping into the garden of a ryokan somewhere farther up in the mountains: surprisingly tranquil, lush, the presence of moss and stone paths, sliding doors and paper windows.

We were greeted by Chef Hideaki’s wife, our amazing hostess (whose name I unfortunately forget to ask), who then surprised us by ushering us to this sliding door, suspended in the middle of the wall.  I couldn’t stop smiling, thinking how ridiculous I looked trying to squeeze my fat ass into the tatami room.

And then, somehow, we were inside, and the door slid closed, and there was nothing but the enclosed serenity of the space, the distance hum of the world outside our shoji window, a beautiful marble-topped table and floor-level chairs, light-colored wood running the lengths of various edges, and these mysterious white doors. 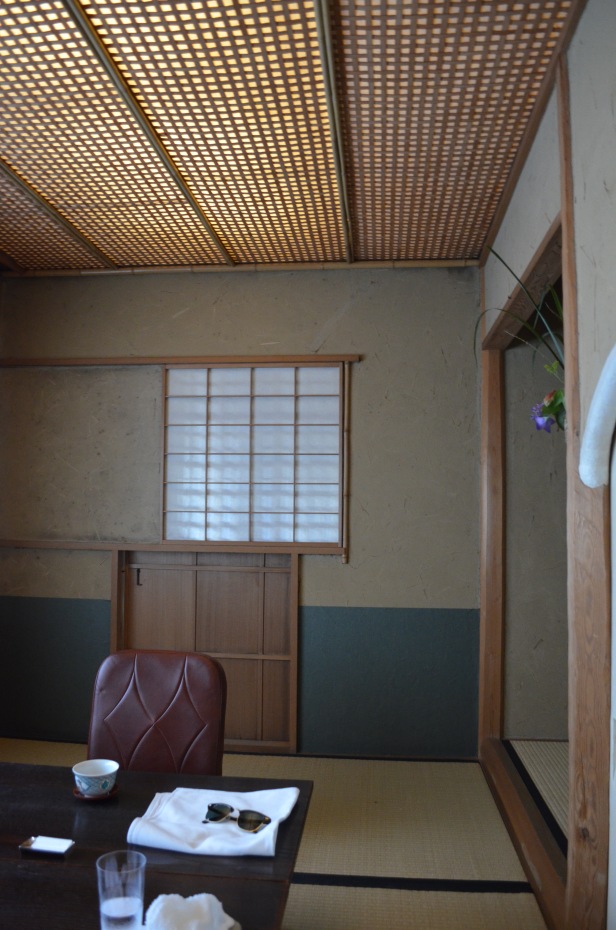 We soon found out what the door was for, as kimono-clad Mrs. Hideaki slid it open to enter the room, kneeling and in the traditional way of using her right hand to set our table while her left gracefully cupped the loose fabric of her sleeve.  She spoke fairly good English, which was a nice surprise for us, and gave us a small cup of hot black tea to start the meal. 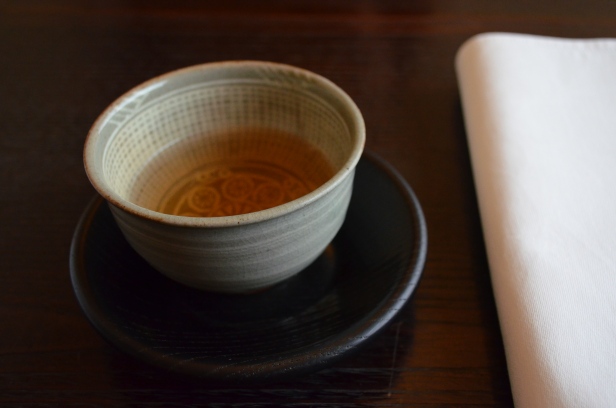 The first course was a small bowl of crab, with baby greens and a yellow flower in almost an ohitashi style (with a light gelee instead of the dark dashi marinade).  This came with a bit of simply steamed baby taro, incredibly sweet chestnut, and two edamame.  Restraint was a fairly consistent theme to the meal (aside from it being lunchtime). 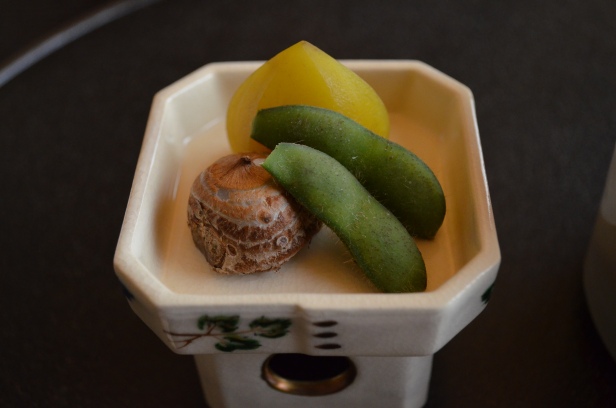 Next, a soup of grilled conger filet with leek and, surprisingly, yuzu rinds, which in the heat of the soup transferred their intensely aromatic citrus essence to both the soup and anytime I put my face near the bowl.  I love yuzu, so no complaints on the sensory overload, which contrasted with how visually composed and subdued the rinds appear.

A fresh plate of sashimi. 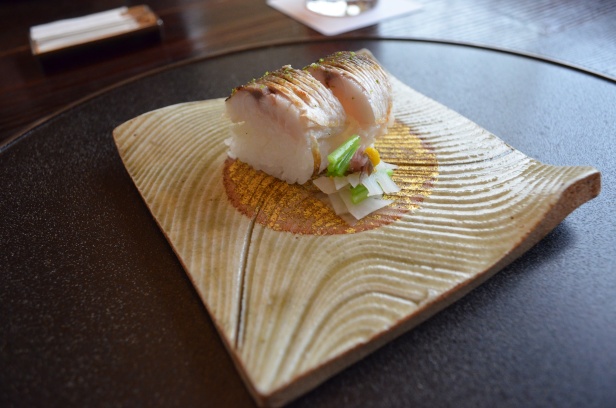 A fried river fish with some gingko nuts, spinach, and tamago.  I think the gunkunmaki was the roe of the fish, but I don’t remember.  I’ve had several preparations of small fish served whole, either fried or grilled, in Kyoto, Osaka, and Tokyo, but still haven’t come to love the overall experience.  While the entirety of the fish is edible, there is a bitterness to the guts and brains.  What meat there is tastes good, and the crunch of the fins and the tail is always fun, but I didn’t really know how to appreciate the dish outside of that visceral experience. 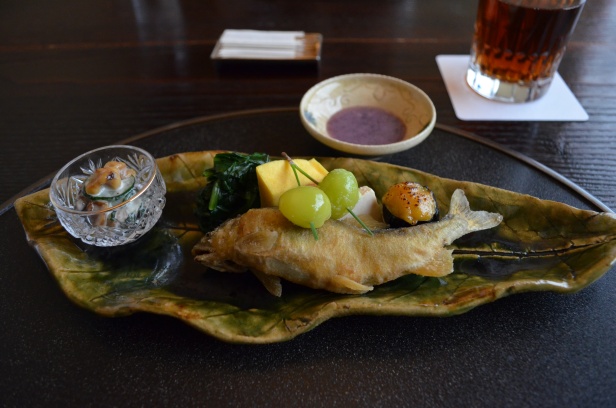 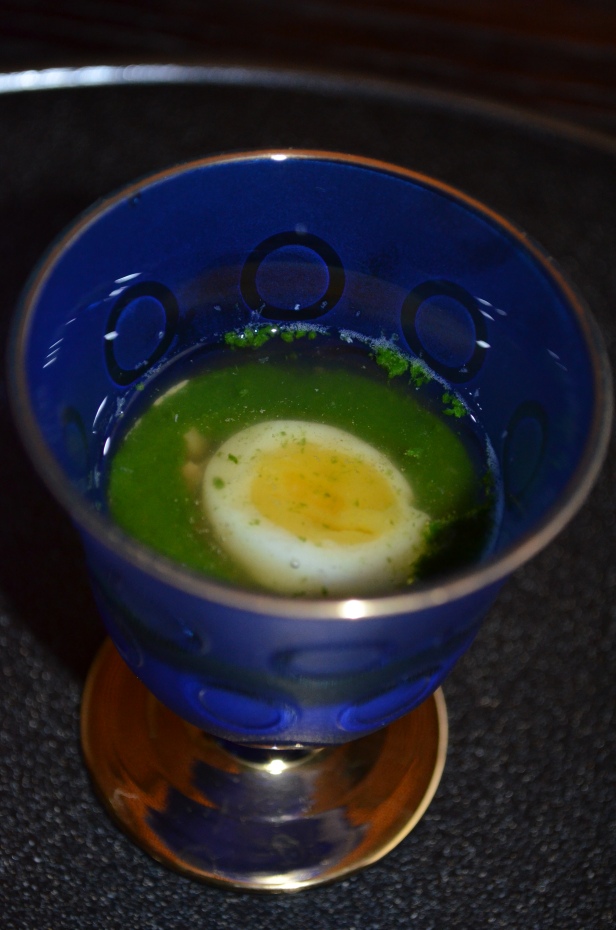 A small bite of fatty pork, braised leeks, and okra. 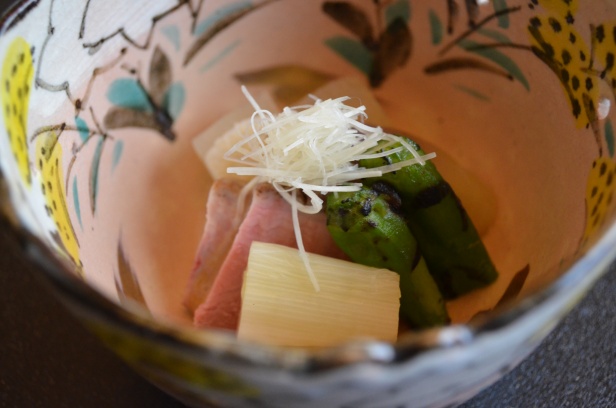 This combination of pickled vegetables and fish floss chazuke was the last savory dish, and a typical wind-down toward the end of meals. 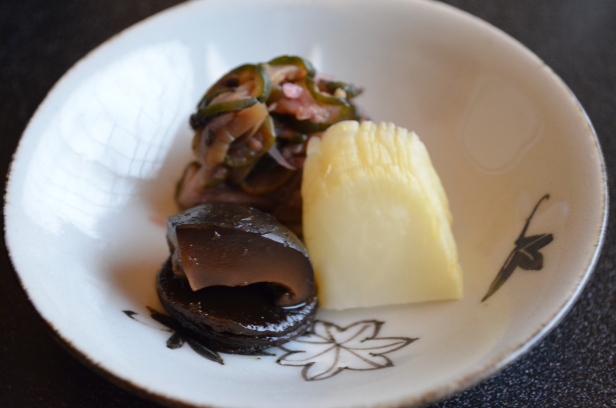 My favorite and most memorable dish at Kashiwaya was this cup of fig jelly, topped with ineffably luxurious sweet cream and fresh chunks of kiwi, grape, and grapefruit. 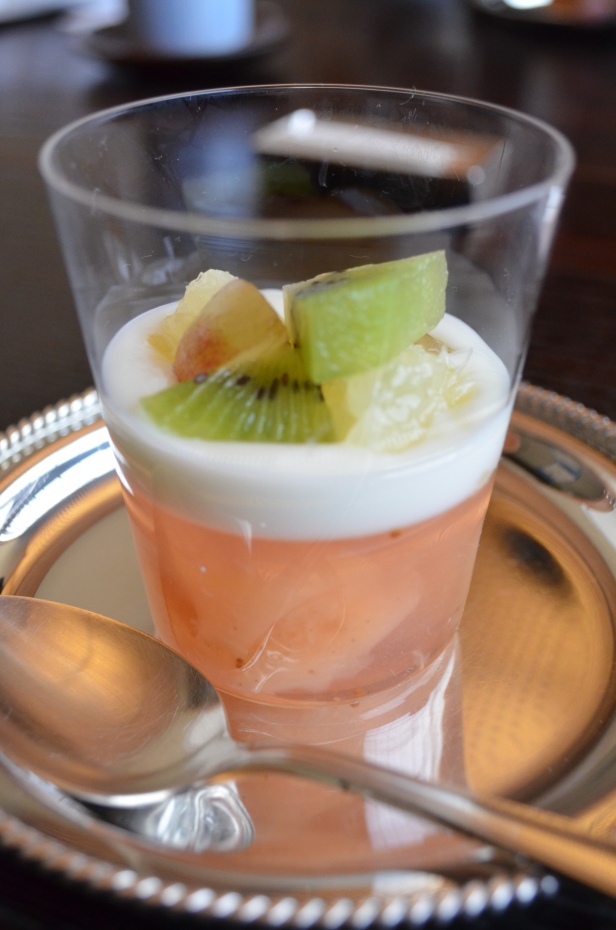 This candied chestnut was also delightful, with a gelatinous molasses covering and a soft, almost creamy chestnut underneath.

A small bowl of bitter green tea to finish.

I know none of the pictures show it, but the service at Kashiwaya was impossibly good, cordial and polished and knowledgeable (to the extent that her English would let her, and she tried at every turn, even writing out some recommendations for kashi-katsu fried skewer places).  We aren’t picky eaters, so they didn’t have to make anything different than how they wanted to, but we couldn’t have asked for more hospital staff and a more pleasant service experience.  I assume that because we came for lunch, our meal was lighter on fish (in terms of quantity, and also did not have the restaurant’s signature tilefish dish) and meat, so it would’ve been interesting to see how the kitchen treated these.  This was the main component missing from my experience.  Both the space and the service were exemplary and unlike anything else I’ve ever had.

5 thoughts on “Lunch at Kashiwaya – Osaka”