I was in LA for a brief stint, shadowing my friend at his Italian restaurant and also doing a fair amount of inspirational eating for my own Shanghai project, which largely involved stuffing my face with delicious things hoping to be inspired.  It’d been about two years since I was last at Ado, a nondescript yellow house off Main Street in Venice, just a few blocks before the sceney dives and restaurants of Abbott Kinney.  But in the meantime, I continued to hear good things, so I came back for a catch-up with former coworkers, many of whom were Ado aficionados.

I was happily surprised to find it mostly unchanged, still small and unlit and noisy, still without air conditioning (in a hey-it’s-a-little-warm-in-here-right sort of way).  The loudness and the darkness (and the wine) really go a long way to create an intimacy that I enjoy, of being at the house (figuratively, I suppose) of somebody who knows how to host a tasty dinner.  I skipped the antipasti in favor of the red beet tagliolini with quail ragu and melted taleggio (a wise decision, in retrospect), but the carpaccio and the tuna tartare that my friends ordered were tasty as well. 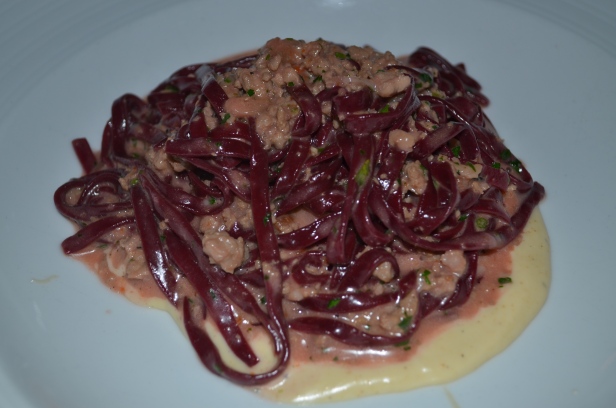 Then one of the folks at the table stepped it up a notch (by which I mean two orders of white truffle agnolotti):

For my secondi, I had the seared duck breast, which was cooked beautifully, just the right amount of salt and sear.  My neighbors at the table ordered seafood linguine and (I think beef) ravioli, both of which were quite yummy.  They gave me good reason to miss the plump, juicy shrimp rarely seen in China and that umami from a cooked-down meat fillings in ravioli. 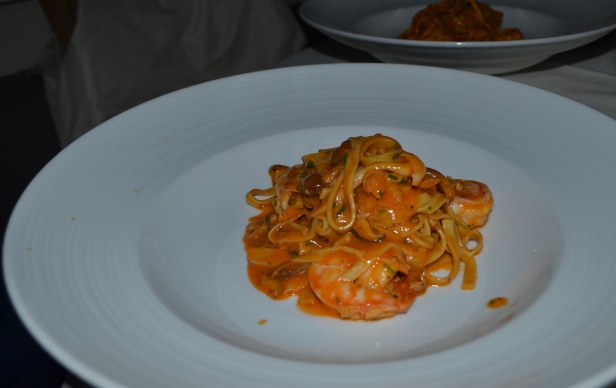 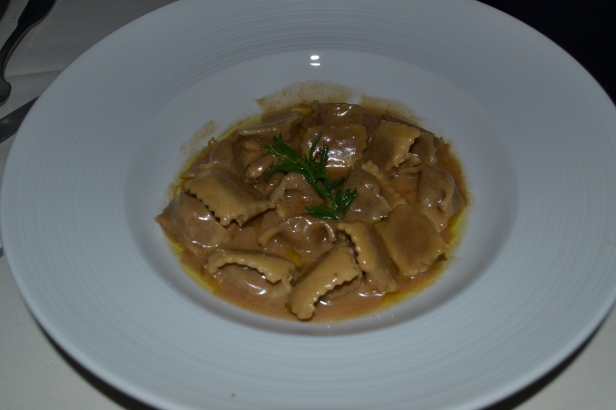 The split bill was a bit unkind, but largely because of the large bottles of chianti and barolo, and of course the two orders (still shaking my head) of white truffle pasta.  For a cozy night with good friends, or a romantic date, I’d head back in a heartbeat.