I had decided fairly last minute that before I left Shanghai, I would squeeze in an essentially 24-hour food tour of the great melting-pot city of Singapore.  So in the middle of a jaunt to Hong Kong, during which I conveniently signed up for e-channel at Hong Kong immigration (a tremendous, tremendous timesaver that I somehow missed on my last five trips).  A surprise upgraded United flight put me into Singapore just a bit before midnight, and I literally started my food tour as soon as I was able to put my bags down.

The festivities started at the Lavender Food Court, a small collection of shops near the hotel.  Since it was almost 1am, I didn’t know quite what to order that would still allow me to sleep after stuffing my face.

I picked up a bowl of prawn and pork spare rib soup from Albert Street Prawn Noodle, and then some mi goreng. 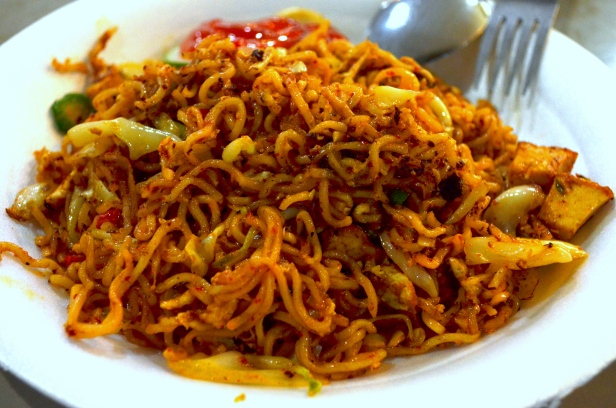 Both noodles were a good pick-me-up in my travel-induced haze of fatigue and sweat.  The prawn noodle broth was not as rich or deep as I’d hoped, but it was hot (and the noodles nice and clean).  The two servings of noodles were a nice way to fill the hole in my stomach, the savory spice of mi goreng a kick that I probably should have had ahead of the prawn noodles (but whatever).

More nuanced dishes wouldn’t have sat quite so easily, but the flip side is that neither of these dishes were particularly creative or memorable, but what was neat to see was how this otherwise quiet corner of town was not only open so late on a random Sunday night, but was a seemingly lively gathering place for all neighborhood characters.

I had a long day of eating ahead of me, so I hustled back to the hotel after noodles and a cold juice.