Our hotel in Taipei was near an offshoot of the famed Yongkang beef noodle shop (永康牛肉面), so naturally we ended up there for lunch.  This location was a bit more cleaned-up than the original one (at least based on Internet photos).  Although that’s not so much a factor for me when it comes to noodle shops, it did make me a bit more comfortable with the array of cold appetizers:

I brought back a few plates to nibble on while we waited for our noodles: 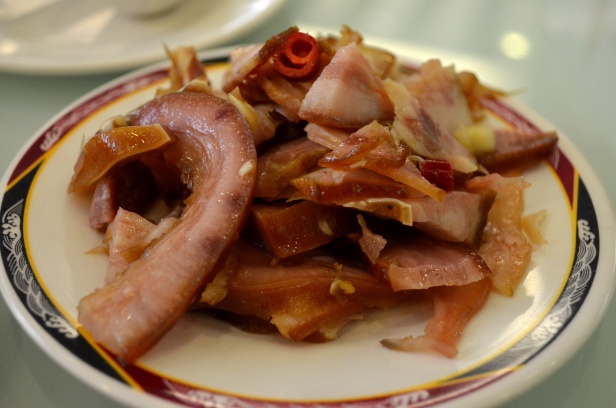 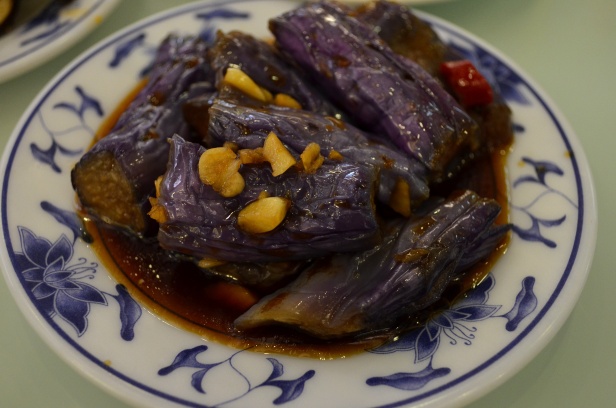 I especially liked their version of chili pork ears (although it may have just been ham hocks or something) – a much less greasy version of its Chinese cousins, which are usually drowned in chili oil.  On top of the more muted chili and sharper garlicky flavors, Yongkang’s version had healthy, striated slices of meat, again another contrast to the thin, meatless strips I’d been accustomed to in Shanghai.

Then, our hearty bowls of beef noodles (my order was half brisket, half tendon):

The soup was deeply savory and warming, with just a negligible sheen of oil.  I wish the noodles had been a bit thicker and springier, but that’s just a personal preference – they were delicious nonetheless.  The chunks of beef and tendon were nicely braised to the right point of tenderness without being mushy.  I would like to note that beef noodles aren’t nearly as religious a topic as they are to the Taiwanese, so this is nothing besides my statement of (resounding) satisfaction with the bowl I had at Yongkang.

I also added an order of steamed rice-wrapped pork short ribs, a classic Sichuan dish.  I didn’t like this one as much as one I’d had recently at a famed Chengdu restaurant chain, which used higher-quality sticky rice and peppers, as well as peppercorn oil on the ribs.  These, by contrast, were a soft pile, albeit rich in pork fat.