If I wrote or sounded like my little sister, who is twelve-going-on-thirteen and loves Doctor Who and Tumblr, this is what I would write about Sri Nuan:

She literally typed that herself.  If only she’d had the good fortune of eating there with us, she could’ve enjoyed bounties of cooked-to-order seafood, curries, and delicious young coconuts ’til the cows came home.

We went for lunch on a Monday and we went back for dinner the next day.  Although the pick-your-seafood bonanza was only available during dinner, we still snuck in a fried fish with garlic, vermicelli spring rolls, crispy pork green curry (with coconut rice), and a coconut smoothie (inside a coconut). 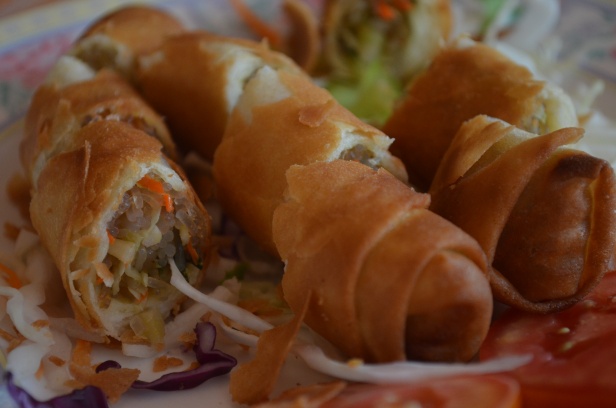 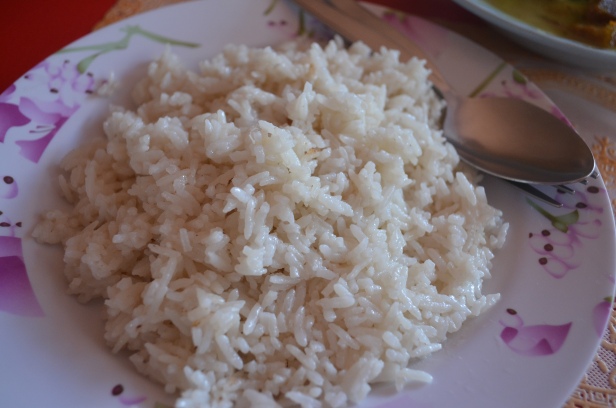 I stole a peek into their cozy kitchen as well:

But dinner the next day was the highlight.  Just look at all the ocean-fresh seafood we had to choose from.  It was like picking baby names.  We couldn’t possibly go wrong! (Editor’s note: there are many, many wrong baby names.)

(Another editor’s note: but all the seafood looked delicious).

We pointed and nodded at one beautiful crab and asked for it be chopped up and stir-fried with fried garlic and pepper.  Then we pointed and nodded at something else – a bunch of clams (to be cooked up in Thai chili).  In addition, we also ordered a Chinese broccoli with crispy pork (coincidentally, great baby name), a chicken red curry, another vegetable no-name, and another coconut rice.  And then we prayed for forgiveness. 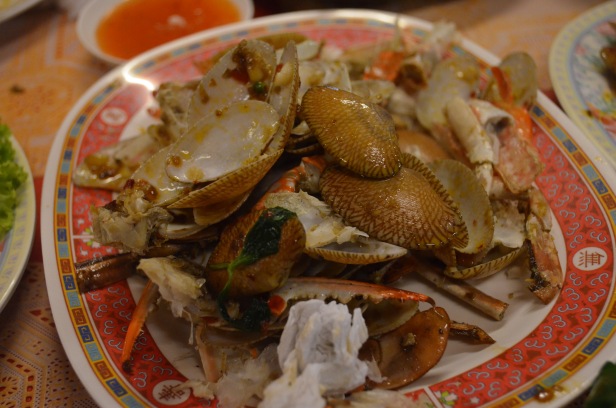 The vegetable no-name wasn’t quite as good as Mumthong’s version (more mayonnaise-y for some reason, but I suppose with a name like that, it’s creative license to do whatever the kitchen feels like).  Other than that, everything was face-spankingly scrumptious.  Fried garlic and pepper never fail, especially with crab.  Sometimes, with steamed crustaceans, you work hard for a bite of sweet, succulent meat, but with so little upfront payment, it’s easy to get bored.  But when you douse the outside with flavor (fried garlic, in particular), you get a prolonged sensation of awesome that begins even before you hit the crab meat lottery.  The clams came in a small pool of thick, tangy chili sauce and deeply aromatic basil.  When paired with the crunchy, slightly bitter gailan, crispy pork was even more a star (as it should be) and less overshadowed by stronger flavors, as was the case in its lunch-time curry form.

We had the audacity to order dessert.  A plate of sticky rice (flooded with coconut milk) and mango, and a hot bowl of banana in coconut milk.  The coconut sticky rice was reliably delightful, and the coconut-banana combo was the first I’d tasted (apparently a Southern Thai favorite).  For me, the latter would’ve been perfect if tweaked a little – I found it a bit cloying (much like a drenched bowl of candied yams), but the texture (a soggy, coconut milk-soaked outside, and a slightly firm bite of banana), and temperature (the heat matches the intensity of the sweetness) worked well together.