Late on a sunny Saturday morning, a few of us piled into Sapori, a new Italian restaurant on Jian Guo Lu that was getting some buzz about its familial atmosphere, cheerful owner, and its array of pizzas.

We started with some coffee – I had a latte, which came in a Parisian-kitsch mug.

Winston ordered the charcuterie plate and a pizza for the table, to which I added an order of spaghetti vongole and the other guys added two beef lasagnas.  Both the communal dishes were surprisingly robust in size, with bright, fresh-looking ingredients – an array of bruschetta toppings: roasted tomatoes, sliced mushrooms, eggplant, salami and prosciutto with a scattering of olives, smoked salmon, caprese, with a few slices of toasted bread hidden under the meats. 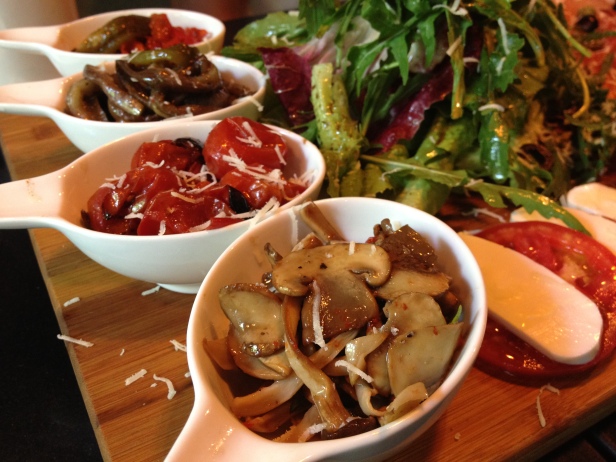 The pizza, one of the many on Sapori’s menu, was quite sizeable, one being enough to split among our relatively hungry group of four, and with a nicely toasted thin-crust and an ample spread of toppings (prosciutto, artichoke, mushrooms, and olives).

The pasta dishes were quite tasty as well, the beef lasagna in particular.  Apparently, they sell out of it frequently, so I’m guessing it’s good to either go early or reserve an order earlier in the day (if going for dinner).  The vongole was nicely cooked and flavored, but the clams were very soft, almost buttery, and less chewy than the stateside littlenecks, which have a consistency that I prefer, flavor aside.

The beef lasagna arrived at the table still sizzling in its bowl, with a browned cheese crust that just begged for the presence of a spoon.

On a plate, a smaller portion held its shape fairly well – and the ricotta had a lightness and sweetness that were quite pleasant to find in what is typically so heavy to eat.

Since the restaurant had run out of its tiramisu, we all took a few bites of the molten chocolate cake that Frank in his infinite appetite ordered.