As I walked in, a bit early for our birthday-party-of-seven reservation, there was an older white couple very eagerly non-verbally thanking the sushi chefs.

An auspicious start to the evening, I’d say.

The stars were aligned in other ways:

1. I’d been on the prowl (lazily, I might add) for a decent, and decently priced, sushi bar in the neighborhood.  At least a viable alternative to Sushi Abuse and its much-to-be-desired sushi rice.  That our friend Richie’s friend had picked this THUMBS-UP of a sushi hideaway seemed preternatural.

2. With our table size and some adventurous eaters, we’d at least get to try a good number of things from the menu.

3. The restaurant was called Seahorse Sushi.  I’m not sure how that figures into this particular horoscope I’m writing, but any underwater species wherein the male carries the eggs through gestation is cool with me.

3. The place was well lit and cozily decorated, and surprisingly large – we moved our reservation up from 5 people, and were promptly shifted upstairs to the third floor.  They also own the floor between the first and the third floors, in case you’re wondering.  The building is narrow, so even though three floors is large, it’s not Times Square obscene or anything.

We started the meal light, since we were waiting on some stragglers:

I think it was my first time having this dish, which was a great starter – something small but heavily seasoned with both a briny soy flavor and a subtle wasabi kick, perfect to nibble on while contemplating what else to order.

I also hadn’t tried natto beans (Japense fermented soybeans) before, and while I like fermented tofu (the spicy version, at least), natto beans (or at least this dish) didn’t have the same overwhelming flavor.  It’s hard to try and tease out a subtle flavor from something with a slimy mouthfeel.  Just not a combination that works for me – either you have a lightly flavored normal soybean – and I love edamame – or you have a very strongly flavored fermented something, so that the gooeyness doesn’t overwhelm your willingness to taste the stuff.  That’s my opinion, anyway.  You crazy Japanese, you, with your mayonnaise obsession and your natto beans.

Once everybody arrived, we finally got started with the body of the meal:

Although the sashimi platter’s quantity didn’t quite warrant its price, its individual components were really good, the head-on shrimp, the clam, and the salmon (not picture) in particular.  I checked with the two others who had already eaten the shrimp whether they’d gone for the delicious brain juice, which is something I’d usually do, but this being China, I wanted to make sure.  They both gestured tellingly at their already emptied shrimp heads, and I didn’t want to be the odd (shrimp head) man out, you know?

Quite tasty, although I’d been very skeptical initially, since I’m not usually one for the more eclectic maki rolls that sometimes seem to be trying too hard.  But the onion topping, duck breast, and the conservatively portioned foie gras were all distinct and distinguishable, and the sweet unagi sauce was placed more on the spoon than the roll itself.

The seared beef maki roll, which came topped with caramelized onions, was also good, but not quite as memorable as the duck and foie gras combination.

We also had the sushi platter, which was good but unmemorable.

Since it was Richie’s birthday, we had needed a cake, which I found myself in charge of procuring before the dinner.  Unfortunately, the dessert shop I originally went to was closed, and the bakery next door must have had a busy day and had run out of whole cakes, so the result was a somewhat patchwork dessert offering:

Not all bad for a Wednesday night. 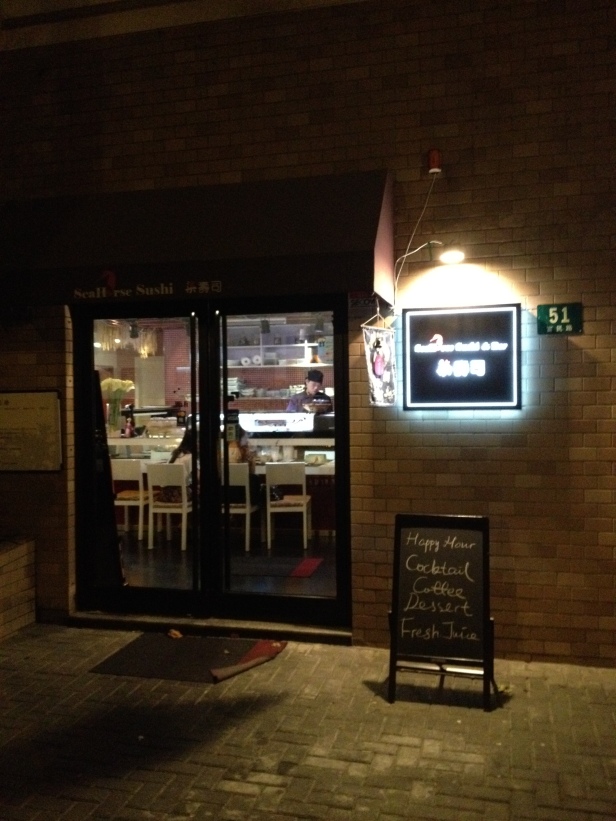